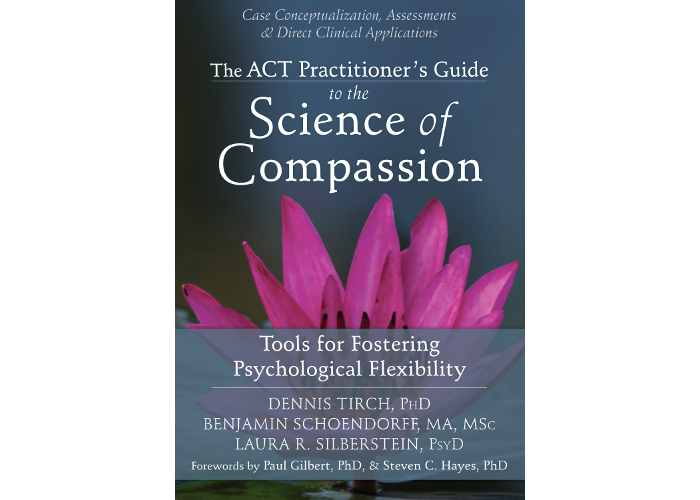 Editor’s note: The following is a part two of a Q&A with Dennis Tirch, PhD, and Laura Silberstein, PhD, co-authors along with Benjamin Schoendorff, MA, MSc of The ACT Practitioner’s Guide to the Science of Compassion: Tools for Fostering Psychological Flexibility. Tirch and Silberstein have collaborated on all responses.

The title of this book changed a few times. Can you talk about that process a little bit? Is compassion the third piece of mindfulness and acceptance? Or is compassion more a quality to draw into M&A?

The book’s original title was: “ACT with Compassion” and it was meant to reflect the natural flow from ACT work to compassion work. The next working title we had involved mindfulness, acceptance, and compassion; that was meant to reflect how interrelated these processes can be. With clients, we might emphasize that mindfulness allows us to wake up in the present moment, and attend to what is happening here and now. Compassion allows us to rest in kindness in this present moment and access our capacity to feel emboldened in the face of suffering. This experience of compassion can facilitate greater acceptance as we find it in ourselves to turn towards those painful and distressing experiences which might be very difficult to address without the stabilizing influence of a self compassionate presence. So, yes, we can consider compassion as a quality that we can bring to our mindfulness and acceptance based practices. However, this quality is not so much conceptual as it is an embodied order of human intelligence which emerges from our distinctively human, species-preservative, care-giving repertoires.

The approach you present in the book is a guide to the clinical application of compassion; how is your approach different from straight compassion-focused therapy?

While CFT is often practiced as a freestanding therapy modality in its own right, its methods have been designed in such a way that they can be used by practitioners who operate primarily in other therapy models. As Paul Gilbert has often stated in trainings, “We call this compassion-focused therapy, and not compassion therapy, because it is a way of bringing a compassion focus to the therapy that you have learned to practice.” As a result, many practitioners of CBT, ACT, and other forms of psychotherapy have integrated elements of CFT and compassionate mind training into their practice without divesting themselves of their prior learning and becoming “CFT therapists” in every sense. There is clear value in exploring training in CFT, in its own right and in an undiluted form—indeed, two of the authors of this book have made the theory, research, and practice of CFT central to their professional missions. However, just some exposure to the literature on the science of compassion and the methods of CFT can provide ACT therapists with an evidence-based entrée into integrating this approach into their practice and alert them to theoretical and practical possibilities for bringing processes and procedures from CFT into an ACT-consistent intervention, creating a compassion-focused ACT.

The ACT community is beginning to turn attention and effort toward the science of compassion. What are some compelling specific examples of research or cases where this is evident?

A number of people within the ACT community have been exploring the role of compassion in ACT. Steve Hayes has been speaking on the evolutionary roots of compassion as a key element of the psychological flexibility model. Kelly Wilson has begun to fold self-compassion and kindness into his training model as key concepts. Robyn Walser, Joann Wright, Martin Brock and other colleagues have been integrating elements of compassion training into their training models for years. Stanislaw Malicki, Emily Sandoz’s late and our group in New York have all been researching the relationship between self-compassion and psychological flexibility in various contexts. Matthew Skinta has conducted a research trail of an intervention for HIV-related shame and stigma that draws upon CFT and ACT. Jamie Yadavaia has run a controlled trial of an ACT based intervention for building self-compassion. Jason Luoma has built a compassion focus into his ACT-based approach for the treatment of chronic shame. We are now working with Trent Codd’s group on an ACT- and CFT-based randomized control trial for the treatment of anxiety, too. Most recently, Andreas Larson has begun to discuss how a CFT intervention might be best researched. So we see a lot of activity within the ACBS community on this front, and we are probably leaving a few wonderful labs and individuals off this list by accident. If we extend this research base to the number of clinical trials that exist for CFT for range of problems—including depression, personality disorders, psychosis and smoking cessation—we see a building base of evidence. Furthermore, the mounting evidence of the importance of self-compassion as a variable in well-being and the considerable neuroimaging research base that supports the effectiveness of training the mind in compassion all combine to point us in a very encouraging direction in developing compassion-focused interventions.

In the introduction to the book you mention an e-mail discussion about how ACT relates to Buddhism in which Steven Hayes raised a significant point—what was the gist of the conversation and his response and why was it so relevant?

A few years ago there was a discussion on the email list for ACT professionals that involved the similarities and differences between Buddhism and acceptance and commitment therapy. Several of us had noticed important areas of common ground in the basic processes involved in human well-being which were shared by both of these approaches to the alleviation of suffering. Steve made a very important point when he drew our attention to the difference between scientific and prescientific traditions. The advantage of applying the scientific method involves our testing of even our most basic assumptions as well as our techniques, in the development of ever more efficient evidence based processes and procedures. In a way, the evolutionary principles of variation, selection, and retention really do show up in the scientific method. Findings are meant to be replicable and methodology is meant to be rigorous and consistent. As a result scientific traditions tend to be progressive and can allow for change and evolution at a more rapid rate than prescientific traditions, which sometimes base their methods simply on continuity across time and a sense of intellectual and spiritual authority held by a few, or even simply found in a sacred text. Steve made a point that in the last 20 to 30 years, ACT specifically—and the cognitive and behavioral therapies more generally—have radically changed, as have other scientific disciplines related to mindfulness and compassion, such as neuroscience. The hope here is that wedding of age-old phenomenological observations about the nature of mind with a scientific approach can create a science better suited to the question of human suffering. It reminded me of a panel discussion in 1991 at Harvard, where the Dalai Lama was asked what he might wish to do if science disproved a point in Buddhism. Basically, His Holiness said that we would need to change Buddhism.

You also mention the parallel between CFT and ACT and Theravada and Mahayana Buddhism in the book—can you explain that here?

In answering this, I’ll present a highly simplified version of history that doesn’t do any of the schools of thought full justice. I’ll just trust the reader to look into this further if it is an interesting parallel. Fundamentally, the oldest school of Buddhist thought, Theravada, emphasized individual enlightenment as an aim, and stressed mindfulness, acceptance, equanimity, and disciplined action, some 2,600 years ago. The flowering of this school of thought changed the world. 500 or so years later, Mahayana Buddhism adopted as a central aim an altruistic aspiration for all beings to be liberated from suffering as a central aim. Compassion, concentration, and engagement with the world became key priorities at this time. To my mind, there is some parallel with our contextual psychotherapies. ACT has historically emphasized mindfulness, acceptance and commitment processes as chief areas of focus for personal growth and emotional healing. Emerging in the public consciousness a bit later, CFT has emphasized cultivating compassion, centering practices, and taking compassionate action. True to the rapid pace of the scientific method, such changes took place over 500 years in Buddhist communities, whereas the ACBS community began seriously looking at compassion about two to three years after it was formed.

Is it possible to integrate and build bridges across therapies without compromising the integrity of the foundations of the models?

If we are mindful that models are precisely that—models—rather than concretized and reified absolute truths, we can deeply study these models and engage in the kind of inter-theoretic discussion that can breathe life into our case conceptualization and therapy. This is very important, in that the a-ontological approach of CBS and the role of defusion in psychological flexibility allow us the opportunity to step out of slavish adherence to allegiance to theories, and to engage with different schools of thought in a pragmatic way.

Is an increased emphasis on compassion better suited to one particular population or another (i.e., clients dealing with shame or self-criticism)?

CFT was developed to treat patients with shame-based difficulties. However, outcome research is demonstrating effectiveness in a number of areas, such as smoking cessation, treatment of psychosis, obesity, personal disorders and other problems. Similarly, the process research we have is demonstrative of the importance of compassion for a range of key elements of well-being, from depression to social connectedness to immune system functioning. When we view compassion as more than an emotion or a value, and come to understand compassion as an evolved motivation that can create a context for effective action, we can see how bringing compassion into the equation can be helpful in most situations. We can imagine how bringing a compassionate focus to our evidence based approach might enhance the good work that we have already been engaging in.

The argument is made in the book that “our evolved capacity for compassion is actually an essential ingredient in psychological transformation.” Can you elaborate on that? Are you saying compassion is required in order for any real psychological change to occur?

We humans are a remarkably resilient and flexible species. Humans can flourish without sight or hearing, and can live amazingly meaningful and joyful lives even when paralyzed. It is difficult to imagine one singular human quality that would be so very essential to our well-being as compassion seems to be. So, in a sense, perhaps we can make many positive changes in life without abundant compassion. We are, after all, so tenacious.

However, when we remember the definition of compassion in its most basic terms—a sensitivity to the presence of suffering in ourselves and others, combined with a motivation to alleviate and prevent the suffering we encounter—we can see how essential this mentality is to addressing our psychological pain, as well as the dominance of limiting patterns of thought and action that keep us stuck in relentless struggle with our experience. When we recall that this compassion flows from our evolved capacity to feel connected, stabilized, and courageous when we experience affiliative emotion, we are reminded that human compassion, warmth, kindness, and mindful bravery are possibly some of the most important elements in transforming our minds and lives.

For more information on the role of compassion in ACT, check out The ACT Practitioner’s Guide to the Science of Compassion.