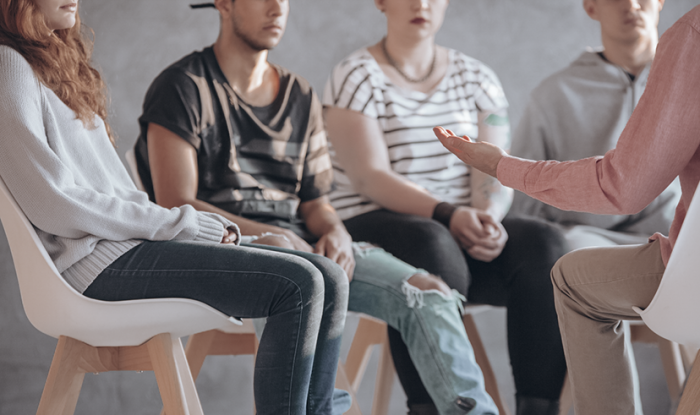 The college years are the years that young adults learn to individuate from parents, to establish social relations, to settle into their sexuality, to decide how they’ll deal with drugs and alcohol, and to rouse to financial, intellectual, and social demands. Students are adjusting to newfound freedom, with more control over their schedules, selection of activities, choice of friends, food consumption, and myriad similar choices large and small. At the same time, there is often a loss of family contact, and exposure to religious, racial, sexual, or cultural differences that may be disconcerting. For some large groups, such as international students, these stressors can be almost overwhelming (Matsumoto et al., 2001; Muto, Hayes, & Jeffcoat, 2011). Failures in adjustment and mental health problems that occur during this time can have long-lasting consequences (Eisenberg, Golberstein, & Hunt, 2009; Seeley et al., 2011; Zivin, Eisenberg, Gollust, & Golberstein, 2009).

Research has shown that:

Statistics like this are a challenge, but they also represent an opportunity, which implies that college is a pivot point. The mental health problems that emerge during this time of transition may last for years (Zivin et al., 2009) or even a lifetime. But another conclusion we can draw from these findings is that higher education is by its very nature designed to create life-changing experiences.

An infrastructure exists on campuses to educate and shape human beings. In a sense, the college community is the perfect environment to provide potentially life-changing interventions. College is about learning, and learning how to live a vital, committed human life is in a deep sense the whole purpose of psychological intervention. Furthermore, college is often intensely social, in a way that post-graduate life may never again be. This factor allows the use of social processes to facilitate change that might not be possible at any other time in life. The college years are critical to healthy development, and offer special opportunities for change that could provide significant behavioral growth which could extend to a large portion of the entire population over time.

But colleges and universities are overwhelmed, especially college counseling centers. Public relations and the legal effects of mental health problems have taught campuses that they have no choice but to expand their mental health efforts, in spite of the reality that most are being asked to do more with less resources. In the instances of mass killings and suicides, as in the massacre at Virginia Polytechnic Institute and State University in Blacksburg, Virginia, investigations questioned the roles of the college counseling center. In the years since, Virginia Tech has paid millions upon millions of dollars of awards to victims from lawsuits, and continues to do so with no end in sight. Any college administrator looking at such situations realizes that in the modern day, it is a risk to the entire institution, not just to the health of students in need, to neglect campus mental health efforts.

But research has shown that it’s not enough just to have a well-staffed counseling center, because treatment seeking can be low among college students (Hunt & Eisenberg, 2010). Students report not seeking services partly because they lack time, want to try to handle these issues on their own, or are not convinced of the seriousness of their problems (Eisenberg et al., 2011).

Five Reasons that the acceptance, mindfulness, and values approach is important

The diversity of the problems faced by college students is stunning. Combined with the extent of need, it’s hard to fathom how institutions can make a real difference across the board. While existing prevention programs such as those for eating disorders or alcohol abuse, are efficacious, many of these programs are underutilized and limited to particular populations who must first be willing to participate in a program that identifies them with a particular issue. Additionally, the cost and complexity of offering programs for the vast range of problems that exist among college students becomes overwhelming. What mindfulness and acceptance offers here is the possibility of a transdiagnostic approach that can develop resilience skills for the prevention of a wide range of difficulties, and simultaneously improve a wide range of existing problems.

One example is a study by Muto et al. (2011) that applied a self-help program in Acceptance and Commitment Therapy (ACT; Hayes, Strosahl, & Wilson, 2011) to more than half of the Japanese International students at a Western university campus. The students were recruited simply because of their international status, not their level of distress; but in that context, the amount of clinical problems was stunning: 80% exceeding clinical cutoffs on one or more measures of anxiety, depression, stress, or general mental health. Very few had sought treatment for these difficulties, nor were they likely to, given the cultural view of psychological difficulties as more shameful and stigmatizing (Masuda, et al., 2009). In a randomized comparison, the program reduced depression, anxiety, and stress relative to a waitlist for those in the clinical range, with generally large between-group effect sizes; and at the same time the program significantly reduced the emergence of mental health problems over time for those who were not initially distressed with a medium effect size. Mediation analysis showed that these effects came due to changes in acceptance and mindfulness processes. Thus, focusing on acceptance and mindfulness in a single program both prevented and ameliorated multiple problem areas. That kind of practicality is part of the hope offered by work in this area due to the transdiagnostic nature and common core processes nature of these methods.

The college setting presents so many different ways of reaching the student population. There is access to counseling, classes, clubs, the Internet, podcasts, and so on. Work in acceptance and mindfulness has proven to be extremely flexible in format. It can be done individually or in groups; in classes or in therapy; over the internet or in person; via peer support or professional intervention. It is one of the most exciting aspects of this work, the possibility that such valuable skills can be acquired through multiple channels if a common set of sensibilities infuses a campus.

Acceptance and mindfulness works fits especially well into the college campus setting because these programs can be beneficial to staff themselves. There is something useful to teachers and providers in this work that seems to prevent burnout and enhance the mental health and sense of personal accomplishment of professionals and clients alike. These effects have been shown with psychotherapy providers, as well as with teachers.

The world has changed. The world has become far, far more verbal. The college student of today grew up with computers, the internet, e-mail, text messages, cell phones, MP3 players and a heap of similar technologies. They are the first connected generation, not just to each other but also to pain, horror, and judgment. If anything terrible happens anywhere in the world, we can know about it minutes later.

Students arrive at college as part of a social network, and with the ability to access information and to multitask. But it is also increasing exposure to judgment, criticism, shame, and blame, with over a quarter of college students saying they’ve been the victims of cyber bullying (Held, 2011). There is a harsh edge to being a part of the connected generation.

Being more open, aware, and active is an antidote to the cultural changes that are making peace of mind more difficult. The early and frequent exposure to pain and judgment has encouraged more avoidant and entangled approaches to psychological experiences. Openness and flexibility help tamp down these excesses. The rise of judgment and problem solving has caused people to drift away from the present moment and to become more focused on maintaining their story about themselves. Being centered in consciousness and in the now helps bring people’s feet back to the ground. As people have been drawn into an unhealthy self-focus, they have put life on hold, or have responded impulsively rather than in ways that create a sense of purpose and direction. Being actively engaged in living out one’s values allows greater openness centered in consciousness to be linked to purpose. For most of us, that is the bottom line of most importance.

It’s not just that acceptance, mindfulness, and values fit the practical and cultural need; it is also that this work has become vigorously evidence-based. We’ve learned that these methods are effective, not just at the level of overall outcome, but also at the level of their components and putatively important change processes (Hayes et al., 2011). In fact, in this field, even within the context of working specifically with college students, over 100 studies have been published in the last decade (compared to almost none in the decade before).

The problems, opportunities, challenges, and larger context of college have led to a moment in which acceptance, mindfulness, and values are arriving on campus. The fit is useful, the need is great, and the data are supportive. If we embrace and guide these developments, they have a chance to make a profound difference.