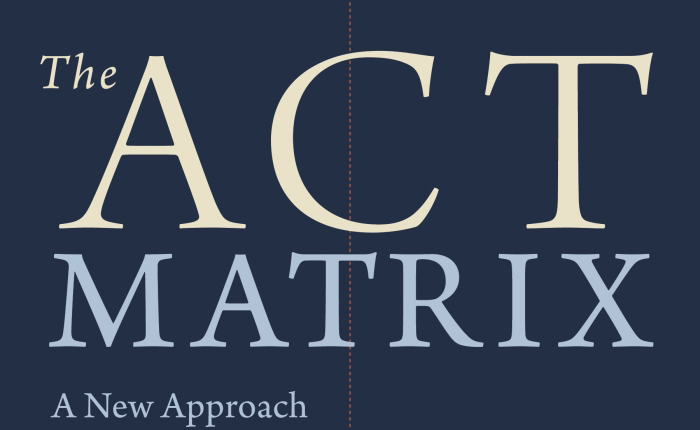 Last week we introduced the ACT matrix, the diagram that forms the foundation of ACT training and treatment, and does so by prompting the user to notice the difference between five-senses experiencing and mental experiencing; and the difference between how it feels to move toward stuff that’s important and how it feels to move away from stuff inside, like anxiety or guilt.

Work with the matrix always starts with setting up the point of view. This essential first step allows people to observe what they’re doing in the context of their whole life—including what they want to move toward. This is the first step toward psychological flexibility. It’s a departure from the traditional health model, as the matrix doesn’t seek to identify what parts (whether feelings, thoughts, behaviors, or chemical imbalances) are malfunctioning or problematic and should be changed.

There are many ways to set up the matrix point of view, a number of which are illustrated in the new edited volume, The ACT Matrix: A New Approach to Building Psychological Flexibility Across Settings and Populations. As long as they work in the situations in which they’re used, all of these different ways are good. As with everything in this model, flexibility is key. One way to introduce the point of view is simply to introduce the two discriminations: between five-senses experiencing and mental experiencing (D1), and between actions to move toward what’s important and actions to move away from what people don’t want to think or feel (D2).

You can introduce D1 by simply grabbing a pen and seeing if you can experience it through each of the five senses. Then, put the pen away, close your eyes, and see if you can experience the pen once more, this time mentally running through each of the senses, noticing any differences between five-senses experiencing and mental experiencing. Sometimes people don’t notice a difference, and that’s okay. Then, you can introduce D2 by bringing to mind some recent action (something others could have seen you do) that was a move toward someone or something important to you. Next, bring to mind some recent action that was a move away or attempt to escape from something you didn’t want to think or feel. Did you notice a difference between how the toward move and away move felt? Sometimes people don’t notice a difference, and again, that’s okay.

Similarly, to know when we’re making an away move, we need to have a good idea of the unwanted thoughts, feelings, urges, and bodily sensations that commonly show up for us. Clarifying and identifying the stuff that shows up inside that can sometimes be a barrier to moving toward values is a crucial part of this process. Above all, we need to be aware of the actions we take too often to move away from unwanted inner experiencing. While many away moves, such as getting out of the way of a bus, are highly functional, others are not. We all do things to move away from unwanted feelings when the better move would be to take the feelings with us as we move toward who or what is important.

Next week we’ll take a look at some of the common ways people get stuck, and how the ACT matrix can facilitate getting unstuck and building psychological flexibility.