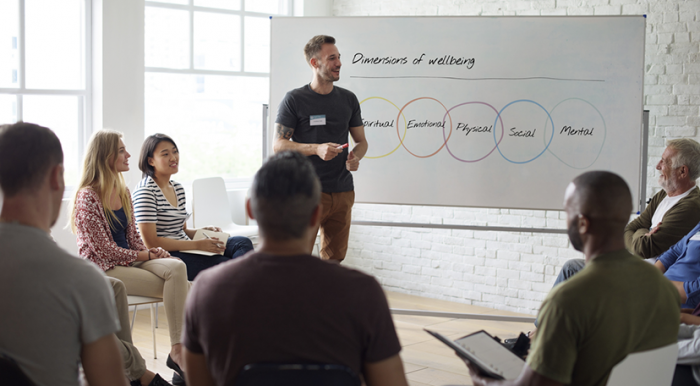 In our previous research round-up about the applications of relational frame theory in the workplace, we’ve presented just a portion of the data that has shown the effectiveness of acceptance and commitment therapy (ACT) interventions in the workplace.

Therapeutic interventions based on ACT are effective in both increasing worker resilience and enhancing innovation and performance. Circling back to our previous discussions of Relational Frame Theory (RFT), understanding how ACT interventions work is a crucial part of understanding the role of relational framing in this context. ACT interventions are designed to impact an individual’s psychological flexibility, that is, one’s ability to contact the present moment without avoidance, enabling persistence of change in behavior in pursuit of values or goals (Hayes, Luoma, Bond, Lillis, & Masuda, 2006).

From an RFT perspective, psychological flexibility can be viewed as an indication of an individual’s repertoire of relational responding. Specifically, certain repertoires of relational responding enable more flexible, adaptive responding to environmental contingencies, whereas other repertoires result in less flexible responding (rigid rule following). According to RFT, many of the functions of antecedents and consequences in the workplace are established through relational responding. For example, the positive emotional feelings (or predicted feelings) associated with having a “corner office” might be due to its participation in sameness (coordination) relations with being successful, or due to “greater than” (comparison) relations between the employee’s view of himself/herself and his/her colleagues. Without language to make one office “better than” another, it is unlikely that the actual differences between offices would affect behavior. Rather, it is the derived sameness relations between the “corner office” and “success” established by the employees verbal behavior and derived comparison relations between “me” and “them” that makes the “corner office” a derived reinforcer. Such verbal transformations of function are necessary for us to work together toward long-term goals, but this power of language to transform the functions of stimuli may also encourage psychological inflexibility because, to a degree, verbal behavior can establish its own reinforcement. In fact, numerous research studies have shown that verbal rules can induce behavior that is insensitive to programmed contingencies (see Hayes, Zettle, & Rosenfarb, 1989 for a review).

As you can see, greater psychological flexibility had not only a direct positive effect on mental health, but also indirect benefits through enhanced job control. Clearly ACT interventions have been effective in a variety of organizations, both in reducing psychological distress at work and in enabling workers to enhance their performance. Interventions have demonstrated reliable positive effects on general mental health and decreases in depression, depersonalization, stigmatization, and burnout. They’ve also been shown to empower employees to take on new work challenges, and embrace positive change in work practices and structure. The constructs based on relational frame theory that are understood to underlie the efficacy of ACT interventions, particularly psychological flexibility, mediate the impact of ACT interventions in the workplace and are associated with increased employee resilience and performance improvement.