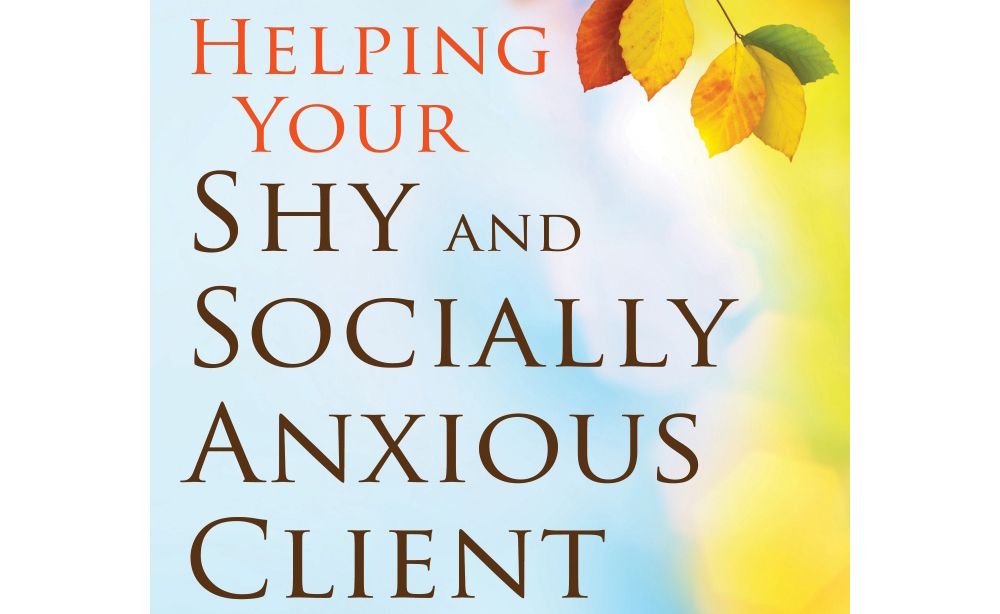 Editor’s Note: This is the final part of a three-part Q&A with Lynne Henderson, PhD, author of Helping Your Shy and Socially Anxious Client: A Social Fitness Training Protocol using CBT. In case you missed them, here are links to part one and part two.

What are some of the most notably compelling or novel approaches discussed in the book?

Perhaps the most novel idea (at least when the idea was first put forth in the 90s) is de-pathologizing shyness as just “being out of social shape,” like being out of shape physically, and changing shyness treatment to social fitness training, which we all need; then defining social fitness as a state of physiological, behavioral, emotional, and mental conditioning that implies healthy, adaptive social functioning and a sense of well-being, as well as healthy satisfying relationships with friends and with an intimate partner.

Another idea is that social fitness practice goes on throughout life. We all have temperaments to manage and to develop for satisfying lives with each other, so therapists practice whatever skills they are working, just as clients do, providing a collegial atmosphere in which to practice. It also allows for lots of humor at ourselves as we make funny mistakes and learn from each others’ responses to us. It makes all our experiences just part of the human condition.

Other novel ideas were adding specific attributional and self-concept distortions and specific Socratic questioning of negative attributions and entrenched negative beliefs about the self and others.

Another novel idea is recognizing that the social skills training that is part of social fitness training also constitutes a desensitization program of exercises in that clients are desensitizing to intimacy. Practicing self-disclosure and trust building in dyads serves as exposure to intimacy.

After studying social psychology as a visiting scholar at Stanford for a number of years, I increased my understanding of just how powerful situational influences can be. This led to helping clients pay special attention to the situational influences that could be occurring when they felt shy, such as pressures to conform; or the bystander effect, in which people as a group are more likely to stand by and watch unethical action like bullying than if they are alone.

Are there currently any books or resources that practitioners can recommend to clients to complement the program outlined in the book? If so, which?

I recommend that therapists purchase the books below that are used in social fitness training:

How to Start a Conversation and Make Friends

Reaching Out: Interpersonal Effectiveness and Self-Actualization

Other books that make good supplements are:

The Mindfulness & Acceptance Workbook for Social Anxiety and Shyness

The Mindful Path Through Shyness: How Mindfulness and Compassion Can Help Free You From Social Anxiety, Fear & Avoidance

Briefly discuss the two types of coping styles you mention in the book:  internalizers and externalizers. What are the differences and characteristics of the two?

Larry Beutler has been studying Systematic Treatment Selection (STS) for years in order to be able to match people to the treatments that are most likely to be successful for them. STS guides clinicians in planning and delivering optimal treatments. One of the important factors in selecting optimal treatments is whether an individual has an internalizing or an externalizing coping style. Externalizers can be described as impulsive, stimulation-seeking, hedonistic, action or task-oriented, gregarious, aggressive, and lacking insight. In contrast, internalizers cope by avoiding. They can be described as shy, retiring, self-critical, and withdrawn; contained, even overly-controlled; self-reflective, worrying, and inhibited.

Interestingly, externalizers have been shown to benefit from cognitive behavioral therapies (CBT) and internalizers have been found to benefit from insight oriented treatment. We have found that shy individuals blame themselves for failure and experience shame, and tend to be internalizers, although many clients blame others as well. Perhaps because Social Fitness Training is integrative and combines CBT as well as the development of insight and self-discovery through social skills training, it tends to benefit internalizers. With Larry Beutler and Satoko Kimpara we formally tested this hypothesis in 121 clients at the Shyness Clinic. 88.4% of our clients were shown to have an internalizing coping style and 11.6% an externalizing coping style. The internalizers benefited most from treatment. A later dissertation study at Palo Alto University, however, showed that externalizers also benefited significantly, but less than internalizers. It suggests that combining insight work with CBT for shy and socially anxious clients may be useful.