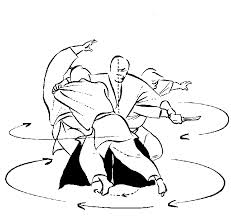 The purpose of the matrix diagram and noticing the two differences is to get unstuck from mental experiencing. The primary reason for noticing the two differences is that noticing requires no language, and language is the stuff of mental experiencing. Of course we can’t completely free ourselves from language—nor should we. It’s useful, and we’d lose our way in a hurry if we completely disconnected from it. Instead, we notice the difference between mental and sensory experiencing and learn to have a choice. Learning to have that choice is the essence of psychological flexibility.

In their new edited volume The ACT Matrix: A New Approach to Building Psychological Flexibility Across Settings and Populations, matrix developers Kevin Polk, Benjamin Schoendorff, and Mark Webster assert that essentially, all the stories we tell ourselves throughout our lives can be sorted into the matrix. Part of each story includes the five senses: what was seen, heard, felt, smelled, and tasted. Each story also has mental aspects: thoughts, emotions, and urges. The story will also include actions taken both toward and away. As people tell a story—any story—they can be invited to sort the elements of the story into the matrix.

Often people get hooked into telling their stories and forget to do the sorting. At these times, you can inquire with a gentle “Yes, and?” to draw them back into sorting and noticing the differences. For example, if someone is excitedly telling you about an emotionally charged event that happened last week, and you can see and hear that she is stuck in her mental processing of the story and could probably use a break toward flexibility, you can simply say something like “Yes, and where would you sort that last bit you were talking about?” Obviously, you don’t interrupt every story this way, but if it seems someone needs a little nudge toward psychological flexibility, a quick “Yes, and?” can get the job done nicely.

With “Yes, and?” we enter the world of what some call verbal aikido. If you aren’t familiar with physical aikido, it’s a martial art that involves redirecting physical energy. When someone strikes out, the energy is redirected.

Some aikido masters say they’re showing the other person the way to peace. “Yes, and?” is verbal aikido, taking the energy of words and directing it, even spinning it, into the matrix. The energy that the person was just about to spend on being stuck in the story is now being used to sort the story, get free of some of the bonds of the story, and move toward psychological flexibility. Like physical aikido, verbal aikido takes repeated and deliberate practice, so don’t get hooked and discouraged if you don’t always succeed in redirecting someone’s energy toward the matrix. Keep at it and you’ll soon start noticing a difference.

To move the verbal aikido practice into life, the matrix practitioner often uses a simple homework assignment that involves noticing hooks. Hooks are those moments we all have hwen we quickly get emotionally charged. Maybe a car cuts you off, maybe someone says something unkind, maybe you see a beautiful person. There are all kinds of emotional hooks that we each have every day, and each provides an opportunity to practice a touch of verbal aikido.

The hook gets noticed, and then the next action is noticed. Inherent in noticing the hook and noticing what is done next is noticing the effect of the hook. Did the person expend much energy? Did the person fight against the hook or carry it along? What came next, a toward move or an away move? These questions are not necessarily asked directly; they’re inherent in the noticing.

For more about verbal aikido and the ACT matrix, check out The ACT Matrix: A New Approach to Building Psychological Flexibility Across Settings and Populations.