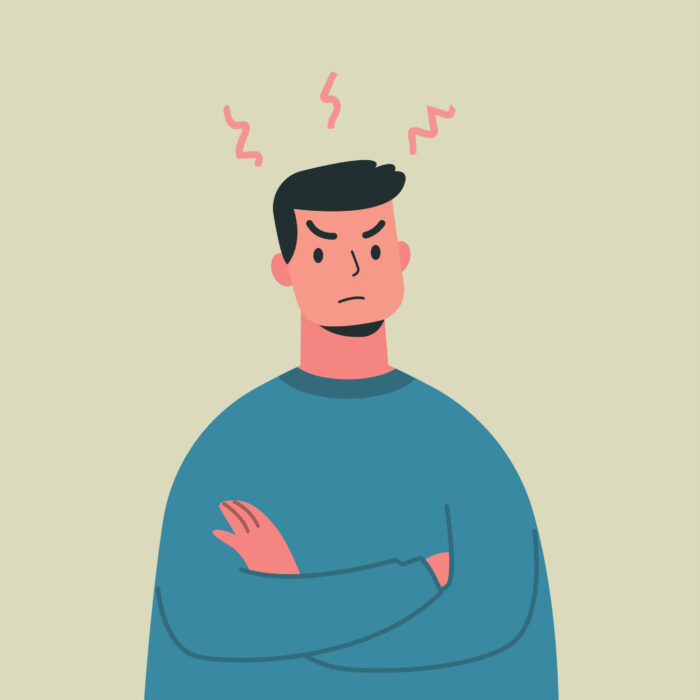 By Russ Harris, author of When Life Hits Hard

Antonio grimaced. A huge, muscle-bound cop, he crossed his arms tightly across his chest. “Don’t give me that hippy shit!” he growled. Antonio’s wife, Cathy, had pushed him to see me, and he resented it. Several weeks earlier, Antonio’s baby, Sophia, had died from sudden infant death syndrome (SIDS). He and Cathy were devastated, but they both were handling their grief differently.

Cathy was reaching out to friends and family, expressing her feelings, allowing herself to cry, and mostly taking good care of herself. In stark contrast, Antonio was cutting himself off from just about everyone and spending every evening in front of the TV, saying little but drinking heavily. Whenever Cathy tried to talk to him about their loss, their heartache, their suffering, Antonio would get angry and shut her down.

Despite his resentment at seeing me, Antonio cared deeply about Cathy and wanted to make things better. He saw quickly that his behavior was largely an attempt to escape pain. He loved his work, and during the day he threw himself into it and mostly forgot about his loss. But not at home. Everything there reminded him of baby Sophia, especially his wife. And with those reminders came pain like he’d never known. Drinking, refusing to talk, zoning out in front of the TV: these behaviors gave him some relief from that terrible pain—but at a huge cost to his relationship with his wife.

“You’re pretty good at beating yourself up,” I said.

“And is all that beating yourself up helping you to deal with the situation?”

“What do you think?” he asked sarcastically. “Of course, it f*cking isn’t.”

“So,” I said, “given it’s not really helping, are you open to trying something different?”

“Don’t give me that hippy sh*t!” he growled.

“You know, that’s quite a common reaction”, I said. “A lot of people are uncomfortable with that idea. So, I’m just wondering, if I ask you a question, will you give me an honest answer?”

Antonio shifted uncomfortably in his chair.

“Now,” I went on, “as you continue the journey, what kind of friend do you want with you—a friend who says, ‘Ah, shut up! Stop your whining. Stop being such a wimp. Suck it up and get on with it, you big sissy!’? Or do you want a friend who says, ‘This is really sh*t. But hey, we’re in this together. I’ve got your back, and I’m with you every step of the way.’”

Antonio cleared his throat. “Well, obviously the second one,” he said.

“So, what kind of friend are you being to yourself?” I asked. “Are you more like the first or the second?”

Above is an edited extract from When Life Hits Hard, my new self-help book on acceptance and commitment therapy (ACT) for grief and loss. Self-compassion—acknowledging that you’re in pain and doing something kind and caring to ease your suffering—is a central part of the ACT model, and a powerful intervention with any form of loss. Unfortunately, many people initially dismiss, reject, or even attack self-compassion. They may think it’s flowery, airy-fairy, New Age, hippy-ish, or touchy-feely. Some see it as psychobabble or a religious practice. Others find it threatening or anxiety-provoking. Men may see it as “effeminate” or “unmanly.” And gender aside, many people see it as “weak,” “soft,” “self-pitying,” “self-indulgent”, “not really dealing with your problems,” or insist that “I don’t deserve it.”

Well, as the saying goes, forewarned is forearmed. So, let’s take a quick look at some of the most common objections our clients may have to self-compassion, and how we might respond. Of course, hold all these suggestions lightly, and modify or adapt them to suit your way of working and speaking. And keep in mind, before using any of these responses, we would always first normalize and validate the client’s negative reaction. We may also want to explore how that reaction makes perfect sense when we look at the client’s previous life history, family background, childhood, upbringing, culture, occupation (and possibly also past negative experiences with therapy or self-help).

Response: We could acknowledge that yes, there are religious practices for self-compassion, and yes, over the years its merits have often been touted by hippies and New Agers. But times change, and self-compassion is now firmly in the domain of Western science. Many respected scientists have researched the benefits of self-compassion (without any religious element to it) and found it to be helpful with a wide range of problems—from anxiety and depression to grief and trauma.

Response: We could first explore some variant of this question: “If someone you love were in great pain, really suffering, in a way similar to you—what would you say or do?” Once we elicit the answer, we can then ask: “And would that be ‘weak’ (or ‘unmanly’) if you did that?” The client will almost certainly answer “no”. So, we can then explore: given there’s nothing weak (or unmanly) about being kind to a loved one in great pain, surely the same applies when we’re kind to ourselves?

Objection #3: It’s not dealing with the real problems!

Response: We can share the fact that, “Research tells us self-compassion actually helps us deal with our problems; it helps us regroup and recharge, so we have the motivation and energy to take effective action.”

Objection #4: It’s self-indulgent! What’s the use of feeling sorry for yourself?

Response: This objection arises when people confuse self-compassion with self-pity. We can explain: “Self-pity is the very opposite of what we’re talking about here; it’s an excessive absorption in your own troubles, wallowing in them without doing anything practical to help yourself or solve your problems. That’s completely different to the strategies I’m suggesting, where you quickly acknowledge your pain—without any self-pity, without any wallowing in it—and then you do something practical to relieve it.”

Objection #5: I don’t have time for this; I have to take care of my family.

Response: We can ask the client, “Have you ever flown on an airplane? Remember that warning they give you: always put on your own oxygen mask first before giving assistance to others? That’s because if you don’t get your mask on within about thirty seconds, you’ll pass out, and then you can’t help anyone. So, think of this as putting on your oxygen mask so you can cope much better, and also take care of others.”

Objection #6: That’s just “giving up”. It’s not dealing with the problems!

Response: We can explain that actually. Self-compassion helps you to keep going instead of giving up, and it gives you the strength to actually deal with your problems. We may say something like, “We’ll get to problem-solving and action-planning later; this comes first so we’ll have the energy and strength to do what needs to be done.”

Response: Some people resist self-compassion because they think it’s selfish or self-indulgent. So again, it’s useful to ask them to take a different perspective. We may ask: “If your best friend was struggling through a really tough patch, wouldn’t you support them, and help them through it? And if they accepted your help and kindness, would you judge them as self-indulgent or selfish?” Clients invariably answer “no”, so we can then gently and kindly highlight this double standard, and go on to suggest, “If your friend deserves kindness and caring in their time of need, surely you do, too.”

Response: This kind of reaction is very common in clients with deeply entrenched self-hatred (which is often linked to a past history of trauma). It usually indicates the need to change tack and work directly with the client’s self-judgmental narratives. (In the ACT model, we’d do this through a process called “cognitive defusion.”)

This is by no means a comprehensive list of all possible barriers to self-compassion, but it covers a lot of the more common ones. And as you can see, it’s often useful to ask questions that help clients to shift their perspective: to consider how they’d treat others, or how they’d expect others to behave if roles were reversed. To see how this played out with Antonio, here’s another brief extract from the book:

I nodded. “Yes, your default setting is like the first friend: “Suck it up, get on with it, stop whining, no one cares!”

Antonio nodded. “That’s pretty much it.”

“But if your best friend’s daughter had just died, that’s not what you’d say to him, is it?”

“What would you say to him?”

“Ah, Jesus! I wouldn’t have a fucking clue!”

“Well, just think about it. Usually when people are in great pain, they want to hear two things: (1) ‘I can see you’re hurting’; and (2) ‘I’m here for you.’ So how would you say that in your own words?”

Antonio thought for a moment, then said softly, “I guess I’d say, ‘This is really fucking shit, man. It’s the worst ever. It shouldn’t happen to anyone. Especially not you. I’m here for ya…whatever you need…’ At this point, his voice cracked. The tough cop mask disappeared, and tears welled in his eyes. Like most of us, Antonio knew how to be compassionate to others but struggled to be compassionate with himself.

***
The take-home message: negative reactions to self-compassion are not uncommon. So, when they arise, normalize and validate them, and then gently help your clients shift perspective.

Russ Harris is a medical practitioner, psychotherapist, and best-selling author of The Happiness Trap—which has now been translated into thirty languages and sold more than one million copies. Russ is one of the world’s leading authorities on acceptance and commitment therapy (ACT), and has trained over 50,000 health practitioners in the approach. In 2015, he wrote an ACT protocol for the World Health Organization (WHO) to use in refugee camps—and their research shows this brief intervention leads to significant improvements in post-traumatic stress disorder (PTSD) and depression.