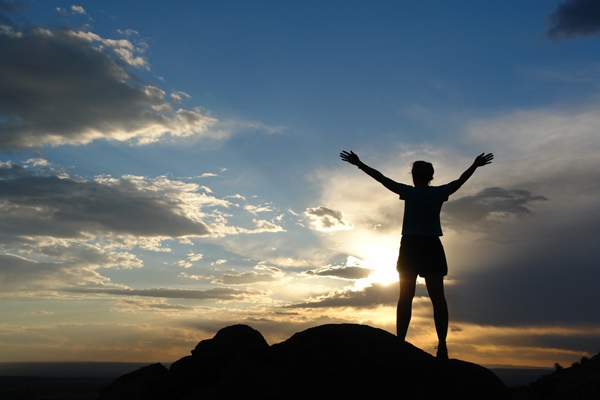 Editor's note: The following was adapted from the edited volume, Mindfulness and Acceptance in Social Work, edited by Matthew S. Boone.

Imagine a young mother suffering with chronic back pain and persistent depression. On days when she wakes up hurting, the last thing she wants to do is drag herself out of bed to get her daughter off to school. She feels a pit of anxiety in her stomach. She worries about what she will feel when she gets up. She also worries about neglecting her daughter if she stays in bed. She criticizes herself for being weak, then criticizes herself for being so hard on herself. None of her thoughts motivate her to get out of bed. The urge to go back to sleep tugs at her, promising a respite from the pain in her back, the burning in her stomach, and the war in her head. Meanwhile, what she really cares about—being an attentive and loving parent—slips quietly into the background.

Popular conceptions of health and wellness suggest that the solution to her problem lies in alleviating her pain, both physical and emotional, so that she can live a better life. And indeed, this is sometimes possible: with the right medicine or treatment, pain can go away. But a lot of pain is not so easy to alleviate—not only the kind of chronic back pain and depression she experiences, but also the normal pain of living, like sadness and anger. And preventing pain from showing up is next to impossible. If we are going to live, we are going to hurt. If we try to succeed at something, we will risk failing. If we build loving relationships, we will risk losing them. No treatment in the world can prevent life from hurting.

Acceptance and commitment therapy (ACT) is a mindfulness-based cognitive behavioral therapy that draws on this understanding of human experience. ACT normalizes pain, even the pain that shows up as part of what we call psychopathology, and teaches clients to respond differently to it. Where there is unnecessary avoidance, ACT teaches approach. Where there is unnecessary attachment, ACT teaches letting go. Clients learn to open up to their pain, welcoming it as an invited guest (i.e., acceptance) when doing so facilitates pursuing what truly matters to them (i.e., commitment).

ACT seeks to increase psychological flexibility, “the ability to contact the present moment more fully as a conscious human being, and to either change or persist when doing so serves valued ends” (Hayes, Strosahl, Bunting, Twohig, & Wilson, 2004, p. 5). Put more simply, psychological flexibility means responding effectively to what life offers. When faced with difficult circumstances, a person acting in a psychologically flexible way forgoes ineffective or unnecessary attempts at controlling thoughts and feelings and acts in the service of what is personally defined as important.

Note that psychological flexibility is not an action or feeling state, but rather a quality of responding, one that is dimensional rather than “all-or-nothing.” A person can be thought of as more or less psychologically flexible in any given situation, and behavior can be imagined to lie on a continuum from inflexible to flexible depending on the context.

The psychological flexibility model on which ACT is based rejects the assumption of healthy normality (Hayes, Strosahl, & Wilson, 2012), or the perspective that emotional well-being is marked by an absence of pain and a surfeit of pleasure. Instead, ACT assumes that a person will naturally encounter a continuous stream of thoughts, feelings, emotions, physical sensations, and memories—some sweet, some sad, some neutral—throughout his or her life. These “private experiences,” in ACT terminology, are neither bad nor good. Problems emerge when normal, evolutionarily shaped behavioral processes are inflexibly applied in response to uncomfortable private experiences. And so, the inevitable pain of living, such as the grief one feels at the loss of a loved one, becomes entrenched and calcified into something different: suffering. In ACT, this is called the assumption of destructive normality (Hayes, Strosahl, & Wilson, 2012).

One of these processes is experiential avoidance, or excessive efforts to avoid and control private experiences or the situations that give rise to them. The behaviors described in the introduction—sleeping to escape physical pain, isolating to prevent feeling anxious, and drinking to quell craving and dread—are all examples of experiential avoidance. Each behavior is more or less effective in the short term. But the consequences of these behaviors, accumulated over time, create and reinforce the very problems they are intended to manage.

Fusion, another process that can contribute to inflexibility, is the propensity to allow the products of one’s mind— thoughts, images, memories, and meaning making generally—to have a dominating influence over one’s actions. A person with a history of trauma experiences a flashback and tries to escape the “danger” by drinking or injuring herself. A person with a history of failed relation- ships thinks, “I can’t trust anyone,” and repeatedly accuses his partner of infidelity. In a state of fusion, rules, predictions, evaluations, judgments, comparisons, and whatever else the mind can create crowd out other sources of influence, such as lived experience and personal values.

ACT is consistant with the core social work values described in the ethics code of the US National Association of Social Workers (NASW, 2008). Three of them—dignity and worth of the person, importance of human relationships, and social justice—are explored here.

ACT recognizes the dignity and worth of the person by offering an effective model for change that does not position the social worker as different from the client. ACT assumes that social workers and clients are both subject to the same psychological processes and prone to responding in more or less flexible ways in different circumstances. The social worker is distinguished from the client only by the perspective he or she has. ACT privileges the importance of human relationships, in part, by identifying the therapeutic relationship as a locus of change. The ACT practitioner models ACT processes such as acceptance and mindfulness and makes his or her commitment to both the work and the client explicit (e.g., “I will do my best to be present and engaged whenever we meet”). Practitioners also thoughtfully self-disclose about their own tendencies toward avoidance and control and getting wrapped up in thinking (e.g., “I noticed just then that I was trying to fix the sadness you were feeling”).

Threads of social justice are woven throughout ACT, despite its relative emphasis on psychological flexibility at the individual level. First, the explicit stance that both the social worker and client are in the same boat can help to undermine the inherent power differential in the therapeutic relationship, preventing the varieties of oppression that exist outside the therapeutic relationship (e.g., sexism, racism, homophobia) from manifesting themselves inside it. Second, the psychological flexibility model suggests that ACT, and other interventions like it, can be applied to issues of stigma and prejudice, and indeed it has (e.g., Masuda et al., 2007; Lillis & Hayes, 2007). Third, ACT has been applied to people of varying cultures, nationalities, and languages, which supports its interface with culturally competent practice. However, like most psychotherapy modalities, much more work needs to be done to explore its relevance and effectiveness across different populations.