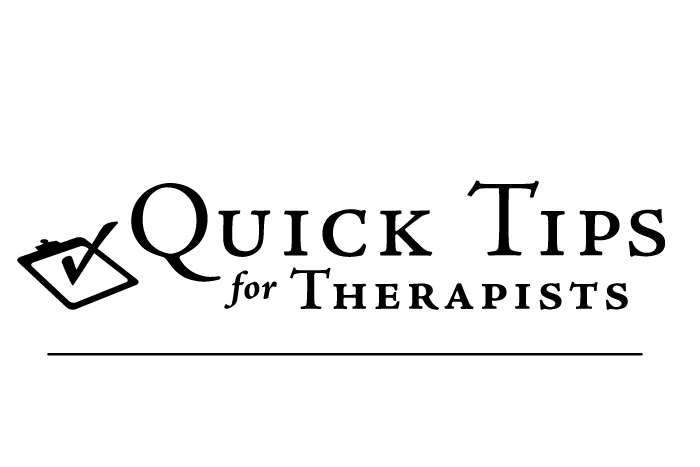 Part two of a four-part series on anger

When dealing with angry clients, practitioners may understandably use interventions that were part of their original training, or perhaps turn to techniques that are currently in vogue. Your go-to ideas might be cognitive or behavioral in nature. They might include social skills or assertiveness training, relaxation and mindfulness procedures, cognitive restructuring, acceptance, values clarification, or even a token economy. These are all fine.

Expand your menu of treatment ideas. You may not have considered some additional adjunctive tools at your disposal. One of us was recently part of an angry dispute between a group of homeowners and their board of directors in his homeowner’s association—a situation that ultimately required legal mediation. The mediation session began at 9:30 am, and by 11:30 am, the parties remained at an impasse. As accusations and blame intensified, the tone of the meeting deteriorated. All of a sudden, the mediator said, “Well, I ordered an early lunch for us. In my experience, not much gets resolved when people are hungry.” Voilà. That’s the idea behind the concept of hanger—hunger-induced anger.

Certain lifestyle changes, nutritional and otherwise, can be useful in anger management. Here is our brief list:

1) Food intake, or hanger. When blood glucose gets low, irritability and rigidity increase. Clients who are well-nourished have better reactions to perceived adversity. A proper level of vitamins and amino acids, and a steady level of glucose in the body, has been shown to reduce general aggression and marital discord. So, ask your clients about nutrition and their eating schedules. Inform them that the best times to face difficult life circumstances are when they are well nourished, so they will have greater self-control and less angry reactivity.

2) Alcohol. Drinking affects people differently. Some folks who drink to excess become withdrawn and lethargic whereas others become angry, argumentative, and explosive. People who experience chronic anger often turn to alcohol and other drugs to reduce their internal agitation. Alcohol, however, also lowers inhibitions and increases confidence and overall expressiveness. A reciprocal relationship may be noticed in some cases: Drinking can lead to more anger, and anger can lead to more drinking. It is wise to consider the potential role alcohol plays in episodes of anger and aggression in any particular client.

3) Sleep patterns, or slanger. Lack of sleep and poor quality of sleep are associated with general irritability, poor decision-making, and a tendency to respond with anger when things go wrong. This sleep-deprivation-induced anger has been termed Slanger. Although adults generally need six to eight hours of good sleep to function optimally, many of us get less than six hours per night. Ask clients about their sleep patterns and, if relevant, help them improve the length and quality of their sleep by providing tips for good sleep hygiene.

4) Temperature. Human anger and conflict rise as the ambient temperature rises. You are more likely to honk at a driver who cuts you off in traffic on a very hot day than a cool day. Life is likely to be best when temperatures are around 72°F. Consider the temperatures in which your clients work and live. Sometimes, the purchase of a small fan or air conditioner, or even opening a window, can do lots of good in a dysfunctional family environment.

5) Music. Music can influence emotions and behaviors. Some laboratory studies have shown that high-intensity music with negative vocal themes leads to increases in hostility and aggression, while calming and soft music decreases arousability. Clients in chaotic jobs and households might consider integrating soft background music into their environments.

6) Light, colors, and smells. Most of us prefer to live and work in an environment with abundant natural light, that is colorful rather than drab, and that smells good. Ask about your clients’ surroundings and, when possible, help them make positive changes that will improve their quality of living in locations where they spend the most time.

To integrate these suggestions into clinical practice, you do not have to become a registered dietitian, HVAC professional, or a licensed environmental engineer. Rather, we simply suggest that you expand your arsenal of tools to include addressing uncomfortable and disruptive lifestyle conditions that make anger more likely to emerge.

Catching up on the series? Read parts one, three, or four now.

Howard Kassinove, PhD, ABPP, is a board-certified clinical psychologist, former chairperson of the psychology department at Hofstra University, and past director of their PhD program in clinical and school psychology. Kassinove is a fellow of the American Psychological Association, the American Psychological Society, the Albert Ellis Institute, and the Behavior Therapy and Research Society. Editor of Anger Disorders, he has published more than sixty papers, and has lectured widely in the United States, Europe, and Asia.

Raymond Chip Tafrate, PhD, is a clinical psychologist, and professor in the criminology and criminal justice department at Central Connecticut State University. He is a fellow and supervisor at the Albert Ellis Institute in New York City, NY; and a member of the Motivational Interviewing Network of Trainers. He frequently consults with criminal justice agencies and programs regarding difficult-to-change problems such as anger dysregulation and criminal behavior. He has coauthored numerous books, and has presented his research throughout North America, Europe, Asia, and Australia. He is coauthor, with Howard Kassinove, of the popular self-help classic, Anger Management for Everyone.