Many couple therapists intervene too soon, before discovering what is actually going on and before understanding the couple’s arousal capacities and deficits. Couples are allowed to be noisy, loud, vulgar, obnoxious, childish, boring, and so on. They are not allowed to be physically violent. Know your couple: if they have a history of physical violence, consider referring them to an appropriate resource (e.g., anger management or a spousal abuse group).

Stopping fast and furious partners from fighting may serve to relieve the therapist, but the couple won’t learn anything. They will do the same thing at home, where there won’t be anyone to stop them. So it’s a bit like time out for a child: the parent may feel better, but the kid doesn’t learn how to regulate the state the parent couldn't manage.

Sometimes one has to draw partners down a bit so they can think clearly. One skill that works well is for the therapist to use rolling chairs (office chairs) for seating, and to move forward and toward the middle of the fighting couple. In addition, the therapist should match the couple’s intensity with a similar tone, volume, and speed in speech, voice, and gestures. By matching the couple’s intensity and shifting gaze between each partner (or going down the middle by looking at the space between them), the therapist can quickly draw down the couple’s arousal. Moving forward grabs their attention, and matching them is (usually) experienced as attunement. Subsequently, the therapist can gradually slow his or her movements and speech and lower his or her voice. Think of how police handle a runaway car without brakes: they speed up and pull in front of the car, then carefully but consistently slow it down to a safe halt. 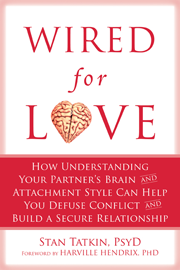 Stan Tatkin, PsyD, is a clinician, researcher, teacher, and developer of the psychobiological approach to couple therapy. He teaches and supervises family medicine residents at Kaiser Permanente in Woodland Hills and lives with his wife and daughter in Calabasas, CA. Learn more about Tatkin's work on his website: www.stantatkin.com.