Most therapists are familiar with the disorientation that arises when their agenda is rendered moot by a client’s failure to complete homework. The resulting session may be a meandering, redundant discussion about the importance of the intervention—and a repeated homework assignment.

When homework is reassigned, the logical question is, “Will they do it?” If nothing changes, why would they? This is crucial and why incomplete homework, met with the right strategy, can be an important clinical opportunity. Simply noting “noncompliance with treatment” in their record is a big assumption and misses the window.

To capitalize on the incomplete assignment, you must assess why it wasn’t completed. “When we last met, we agreed it would be helpful to ____. Can you help me understand what got in the way?” There are a range of possibilities. Are you asking them to do something they don’t want to do? Did they understand the task and have the necessary skills? Did they grasp the rationale and think it would work? If other people are involved, was there disagreement or conflict? Were they deterred by a barrier that could have been predicted and planned for? Is there another presenting problem—unknown to you—inhibiting progress? If barriers exist, we must be aware of and address them—or treatment may stall.

A female client of mine had agreed to implement a strategy with her daughter. By the next session, she had not, so our discussion shifted to why. Initially, she said she was depressed and just couldn’t do it. Seeking specifics, we discussed the sequence and at what point she stopped. That analysis revealed that her daughter’s reaction made her fearful due to past aggression. She also said her husband was uninvolved and minimized the aggression. Had we simply reassigned the homework, the likely similar results may have left her feeling defeated. Instead, we engaged the father, explaining that his wife was afraid and his daughter’s behavior deteriorating. We then developed strategies for them to effectively co-parent, which also improved their relationship, which had been another contributor to her sadness.

Incomplete homework requires a shift, but conceptualizing it as evidence of a barrier provides a strategy and an opportunity. With this client, it provided a turning point. 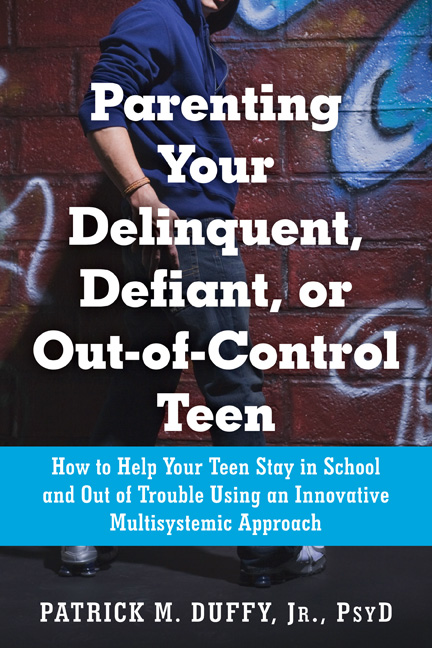 Patrick M. Duffy, Jr., PsyD, a licensed clinical psychologist, has specialized in working with children and families with significant behavioral challenges since 1993. After working in a community mental health center, psychiatric hospitals and a children's home, he began working with Multisystemic Therapy, an evidence-based practice. Through his years of experience, he has served as a therapist, a consultant, speaker and a trainer of therapists across seventeen states and in seven countries outside of the United States. Duffy is an annual presenter at multiple conferences that attract an international audience of professionals and has also been a presenter at multiple conferences across the country and in Canada. He is the author of Parenting Your Delinquent, Defiant, or Out-of-Control Teen.