By Michael A. Tompkins, PhD

Ambivalence—and a great deal of it—is a typical feature of hoarding disorder. Given the considerable ambivalence of most clients with this condition, clinicians want to take care to avoid inadvertently shutting down the client’s motivation to work on the problem. Here are typical ways clinicians shut down motivation when treating hoarding disorder.

Labeling the problem when the person does not find this helpful. Ambivalence may reflect a wish to avoid the shame that accompanies stigmatization. Avoid labeling the person a “hoarder,” unless they find this helpful. Ask the client to tell you what she would like to call the problem and how she sees herself. If she sees herself as a packrat rather than a client with hoarding disorder, accept this and move ahead with working on the problem.

Arguing. Do not argue with the client about what to keep and what to discard or about the pace of progress. Instead, teach skills that assist the client to make effective decisions about what to keep and discard herself. Similarly, do not argue about the pace of the treatment. The client may think you are going too fast one day and too slow the next. At times, you may also think this way. Redirect the client back to the task and invite her to discuss these issues later in the session. 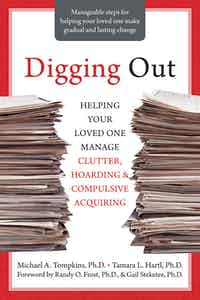 Michael A. Tompkins, PhD, is a licensed psychologist and a founding partner of the San Francisco Bay Area Center for Cognitive Therapy, an assistant clinical professor at the University of California, Berkeley, and a founding fellow of theAcademy of Cognitive Therapy. He has authored and coauthored numerous articles and books on cognitive behavior therapy, including OCD: A Guide for the Newly Diagnosed and Digging Out. Tompkins has presented nationally on the topic of compulsive hoarding and is a member of the San Francisco Task Force on Hoarding. He specializes in the treatment of anxiety disorders in adults, adolescents, and children and is in private practice in Oakland, CA.