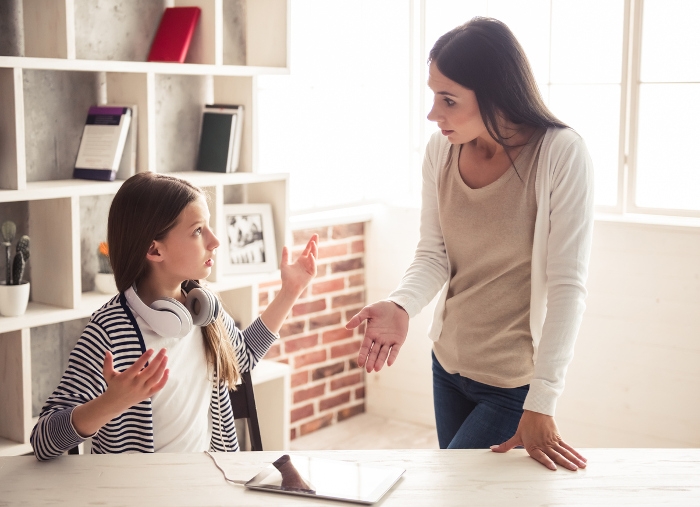 Parent-teen power struggles are nothing new. Teenagers pushing back against parental expectations and limits are a normal part of adolescent development. This is how kids move towards independence and prepare for emancipation.

Ideally, parents and kids problem solve through these moments, find a healthy resolution, and move on. It’s not always easy and it’s not always pretty, but they get through them. But when parent-teen relationships devolve from common power struggles into chronic control battles, it is more than frustrating. It has a destructive impact on adolescent development and the entire family.

Let’s think about what a control battle is. Parents repeatedly try to get their kid to manage a responsibility or stop a negative behavior, and their kid continually resists their effort with all their will, and no progress is made.

So rather than learning to work things out with their parents and be more responsible, control-battle-involved teenagers will learn to avoid responsibilities, argue, manipulate, lie, be overly dramatic, find excuses, close down, or underperform.

They may develop a negative identity, low self-esteem, and consequently, a host of symptoms and self-destructive behaviors. The longer a control battle goes on, the more serious the impact will be on his or her development.

Additionally, control battles use up a family’s emotional resources, and this can lead to parental burnout which must be taken seriously. Burnout can include depression, anxiety, fatigue, illness, sleeplessness, and more.

Additional collateral damage from control battles is the stress and impact on siblings. Other children can wonder why their brother or sister is getting all the parental energy, while they are actually following the rules, and they can become resentful. They may feel that they have to be extra “good,” since their parents are already so stressed out. Or, they may act out in some way.

The most challenging feature of control battles is that they have momentum; they are self-perpetuating. So when a parent or even a kid tries to make a change, the attempted change is met with resistance, and the negative pattern—the parent-teen control battle—persists. This discouraging result leads to a high level of frustration, and can create a sense of hopelessness and futility.

It’s important to know that all control battles can be resolved. The way to accomplish this is for parents to focus their efforts on changing the pattern itself—not their teen. Once parents, and often kids, become aware of the phenomenon of the “control battle,” and focus their efforts on ending it, they can reclaim healthy family functioning and a teen’s positive path towards young adulthood.