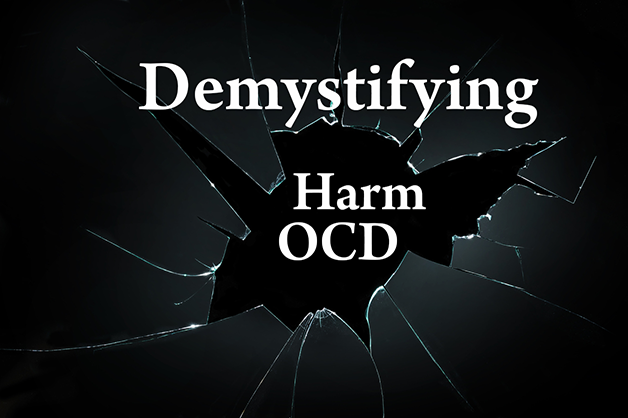 Harm OCD is a term sometimes used to describe obsessive-compulsive disorder (OCD) that manifests as unwanted, intrusive thoughts related to harming the self or others. The term is often associated with unwanted intrusive mental images of violence, catastrophic thoughts of being responsible for violent acts, and distorted beliefs about thoughts themselves causing harm. The thinkers in these cases often live in constant fear that these thoughts represent something horribly wrong with them and desperately try to get certainty that they would not (or could not) harm themselves or others. This manifests as compulsions that may include avoidance of things that can trigger violent thoughts (e.g., knives), reassurance seeking from others that they would not or could not cause harm, and various mental rituals designed to neutralize the unwanted thoughts.

There are a few ways harm OCD may present:

In this form of OCD, a person may be afraid that he could engage in a violent act without reason and without warning. For example, a student with no history of violence and no animosity toward the classmate sitting next to him may become aware of an intrusive mental image of picking up his pen and stabbing the person next to him. He then may wonder if his hand felt an urge to reach for the pen and become concerned that he could “snap” and engage in a violent act. He may then compulsively move his seat away, put the pen in his bag, and recite a reassuring chant like “I would never do that.” This unfortunately sends the message back to his brain that he must have narrowly avoided the danger and that the unwanted thoughts must be valid, so his obsession grows and his urge to avoid grows along with it.

In this form of OCD, the person may be afraid of being responsible for harm coming to self or others as a function of not being responsible enough. An example might include a woman who is excessively concerned that her parked car might have a parking brake malfunction and roll into traffic, causing accidental death. Another example would be a man who takes pictures of his medication every morning and analyzes them thoroughly to make sure he doesn’t accidentally cause himself to overdose.

Fear of Harm by Mental Activity

In this form of OCD, the person fears that thoughts of harm may lead to actual harmful events. This is sometimes referred to as thought-action-fusion, a confusion in the mind between thoughts and actual events. An example might include a child who has an intrusive thought about his mother getting cancer and then worries that he might actually cause her to contract the disease by having the thought. He then may feel he has to perform a mental ritual of repeating the word “health” in his mind 5 times whenever the thought of his mother getting sick intrudes.

Fear of a Harmful Identity

In this form of harm OCD, a person may worry excessively about being a secret sociopath and monitor all of her behaviors and thoughts to feel certain that she could not be one. This might include ritualized avoidance of any media that describes violent acts and compulsively comparing and analyzing the similarities and differences between herself and a serial killer. This might take the form of mentally reviewing a benign action, such as saying hello to a coworker, and asking, “Am I certain I greeted this person to be polite or could I have done it to trick them into thinking I’m normal when really I’m manipulating them the way a sociopath would?”

Sometimes harm OCD presents without any fear of acting on unwanted thoughts. However, when unwanted violent thoughts intrude on the mind, this may result in someone with OCD feeling contaminated by the thoughts or concern that they may not be able to be happy so long as the thoughts are present. This leads to compulsive efforts to suppress or “clean” the harm thoughts, which ultimately leads to worse thought intrusion and increased obsessive fear of being miserable.

Fear of Self Harm

As opposed to suicidal ideation, wherein someone may desire to harm themselves and might formulate a plan to follow through with this, people who suffer from self-harm obsessions are plagued by intrusive thoughts of committing suicide or other self-harm against their own will. This might include thoughts (but not intentions) of impulsively jumping from ledges, taking poison, shooting themselves, etc. This leads to compulsive avoidance (such as hiding all the household cleaning products for fear that they may impulsively drink them) and other ritualistic strategies for feeling certain that they would never harm themselves.

Clinicians who see people struggling with these types of thoughts should do a thorough assessment of how the sufferer is experiencing and relating to the thoughts. Violent thoughts should be determined to be ego dystonic, meaning the thinker should not only find them unwanted, but inconsistent with their overall identity. Clinicians should also address suicidality and homicidality by asking about the client’s insight on these violent thoughts. Does the person find these thoughts and the efforts to suppress them excessive or unreasonable? Once safety issues and co-morbid diagnoses have been ruled out, inventory of the obsessions and compulsions can be taken, and OCD can be diagnosed. Treatment for harm OCD follows the same general protocol that is effective for other forms of the disorder, specifically cognitive behavioral therapy (CBT) with exposure and response prevention (ERP). Rather than digging deeper into the roots of or meaning behind the unwanted thoughts, CBT focuses on psycho-education about the disorder, how it distorts one’s experience of unwanted thoughts, and the role of uncertainty tolerance in resisting compulsions.

Gradual exposure to the feared concepts plays a key role in overcoming OCD. Naturally, since some of the content of these feared concepts may involve hurting others or hurting oneself, imaginal exposure can be a useful tool. For example, the person with OCD could write a narrative in which the they imagine the fear coming true while resisting urges to ritualize or self-reassure. Exposure and response prevention to triggering articles and movies can also be very effective, as well as gradual elimination of safety behaviors and avoidance (e.g., practicing holding a knife while having the unwanted thought). Mindfulness skill development can be particularly useful by training the person with OCD to be a better non-judgmental observer of the thoughts and to view them as creative or random mental activity rather than threats that need to be responded to with compulsions. Overall, these thoughts do not indicate a moral deficit of those who experience them, but are merely unimportant events in the mind about which uncertainty can be tolerated. Harm OCD is not meaningfully different from other manifestations of the disorder, and treatment can be effective when clinicians are compassionate with harm OCD clients. 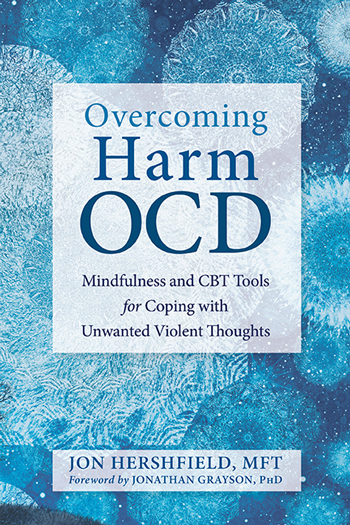 Jon Hershfield, MFT, is director of The OCD and Anxiety Center of Greater Baltimore in Hunt Valley, MD. He specializes in the use of mindfulness and cognitive behavioral therapy (CBT) for obsessive-compulsive disorder (OCD) and related disorders. He is author of Overcoming Harm OCD, and co-author of The Mindfulness Workbook for OCD and author of When a Family Member Has OCD.