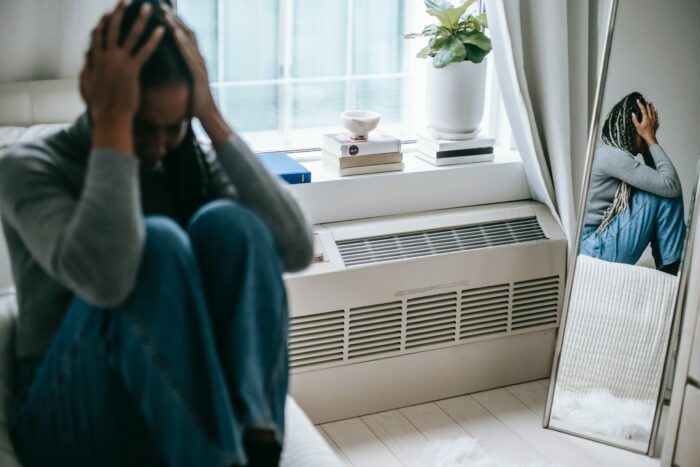 Helen wakes up to a hornet’s nest of thoughts every morning. Usually, they’re about potential disasters that might befall her that day.  Peppered between the possible catastrophes are all the things she needs to plan and make happen—the to-do lists.  Her mood bounces around depending on the thoughts that her mind is throwing at her.  While she doesn’t choose the contents of her thoughts, she does choose—unknowingly—to spend her days and nights bouncing off, chasing and reacting to those thoughts.  And, at the same time, allowing her internal state to be determined by their random firings.

But perhaps more troubling is the fact that Helen imagines that she is her thoughts, fundamentally and irrevocably. There is no separate her to whom the thoughts are talking, who’s listening to or paying attention to the thoughts.  She is inseparable from her thoughts, fully identified with them.  The idea that she could disagree with or doubt a thought is absurd.  There exist only thoughts, of which she is made.

Laura wanted to talk about her boyfriend’s disapproval, and specifically, how he didn’t approve of her more spiritual side.  She told me that she had recently given him a journal in which to write his dreams, since he was interested in dreams.  When he opened the present, she recalled that his face “looked strange and a bit contorted.”  She then decided that her boyfriend thought she was too “woo-woo” for him, that it was a strange present, and of course, that she was strange to give it.  She spent the session talking about how to deal with the breakup that was on its way as a result of her being too “out there” for this man.

What Laura did with her boyfriend’s face, with reality, was what we all do. In her mind, she wrote a narrative about what the shape of his face meant, and of most importantly, what it meant about her. Her thoughts constructed a storyline that was written out of her conditioning, memories, wounds, and core beliefs—but one she trusted wholeheartedly. The reality—what had actually happened—was that her boyfriend’s face had taken a different expression, and we didn’t know why. The thought that his face had made that expression because she was too “out there” was not, in fact, a reality. Our thoughts take what happens in real life—the simple things that transpire—and runs with them…runs off the rails.

Reality is just the “once upon a time” part of the story we write about every moment of our lives.  What we consider reality is, more often than not, just a story made of our own thoughts. And yet, remarkably, we believe our thoughts to be the truth—and not just our truth, but universal truth. Our thoughts determine what’s true—for everyone.

Paul is a ruminator. He goes over the same problem in his head again and again, replaying it and reframing it, arguing his case inside his own mind—to a jury of one. He is convinced that he can figure out why his wife behaves the way she does, and of course, figure out a solution to fix her.  Despite the fact that he’s been thinking about these same problems for years, he still believes that more thought will solve them.

The fact is, we are not only in love with our thoughts, but also utterly addicted to them. The only difference between our addiction to thinking and any other substance is that we take breaks from other addictions, but not so with thinking. We never stop thinking. We want to stop; stop overthinking, ruminating, and obsessing; we want to pull ourselves out of the thinking rabbit hole, but often we just can’t. The thoughts are too sticky to unstick from, too seductive, even when they cause us pain. So too, we think that more thinking is the answer—to everything, and so we keep at it. Again and again, we end up back in the tangled tsunami of thinking, sometimes even against our will.

But, what if we are not our thoughts? What if we are the ones listening or not listening to them? What if every thought that appears does not need to be thought about? Or, for that matter, believed? What if the presence of a thought does not imbue it with any inherent truth or value? And furthermore, what if we discovered that the answer to every problem cannot be figured out with more thinking. That contrary to everything we’ve been taught, less thinking is often the path to relief.

In truth, we don’t have to live our life as thinking addicts. We can in fact fall out of love with what our mind is coughing up. There is a way to freedom. It starts with awareness, first, by acknowledging that we are addicted to thinking and don’t know how to stop. And, at the same time, recognizing and honoring how much suffering our thoughts actually cause us. From there, we can notice that we are not our thoughts, but rather, the ones whose attention our thoughts are vying for.

While we may not be able to control what our thoughts are saying, we can learn to control how we want to respond and be in relationship with what our mind is relentlessly throwing at us. We can find freedom, not from our thoughts, but with our thoughts. With awareness and practice—noticing our thoughts, questioning their veracity and usefulness, becoming conscious of the narratives we construct, and taking a witness seat to what our mind generates—we can discover who we really are, which thankfully, is not our thoughts.

Nancy Colier is a psychotherapist, interfaith minister, author, and public speaker. A longtime student of Eastern spirituality, she is a thought leader on mindfulness, well-being, and digital life. Featured on Good Morning America, Fox & Friends, RT America, in The New York Times, and other media, Colier is also a regular blogger for Psychology Today and HuffPost. She is author of The Power of Off, Inviting a Monkey to Tea, and Getting Out of Your Own Way. Colier resides in New York City, NY. You can learn more about her at www.nancycolier.com.