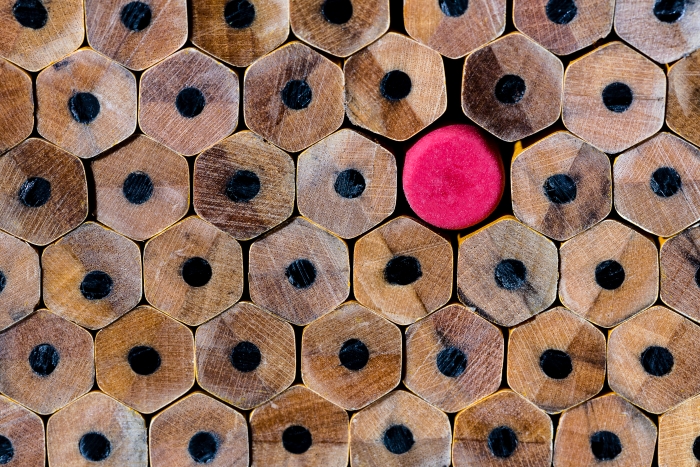 The alarms went off; the bank had been robbed. The police came running to the scene, and were grateful to find a really helpful eyewitness standing by the door of the bank, pointing down the street, saying the bank robbers went that way. The police rush off in that direction, confident that they’ll catch the bank robbers in no time. But what the police failed to notice was that the supposedly helpful witness was dressed in black, wearing a ski mask over his face, and carrying a big bag of money. Yep, the witness was lying and sending the cops on a wild goose chase.

Obsessive-compulsive disorder (OCD) is a lot like that bank robber. It tells you really convincing lies and sends you off in the right direction. For example, Jenn worried about things contaminating her. She didn’t have a specific bad thought about what would happen, she just knew it would feel impossibly gross if she touched germs. She even knew it felt different than her worries about COVID-19, which she knew others were feeling, too. She had particular bathroom routines, avoided touching things in public, walked down the street with her eyes fixed on the ground to make sure she didn’t step on anything, and would wash her hands frequently. She told herself she was nuts for doing all these things, but had to do them anyway.

But here’s the thing: Jenn wasn’t nuts. She was doing the right things, but for the wrong problem. Not wanting to touch germs isn’t nuts; it’s really sensible. Germs are gross. But the more she did to avoid contamination, the more she worried about it, the more things she had to avoid, and so on. Because, like those police, she was running in the wrong direction. OCD stood by the door wearing a ski mask, and sent her off to fix something that wasn’t the problem. The problem wasn’t germs; the problem was that OCD was telling her that she couldn’t handle feeling like she might be contaminated.

Through exposure and response prevention (ERP) therapy, Jenn has found a life beyond her OCD. She used curiosity to see what else she could observe. She didn’t argue with the OCD, instead she recognized that OCD was trying to trick her and tuned in to other information in her environment. She took bold, willing steps, doing what OCD told her not to do and not doing what OCD told her to do. She started with small steps and watched what happened, noticing that even though it was terrifying, she had moved closer toward the life she wanted. And then she used flexibility, not replacing her old OCD rules with new ‘anti-OCD’ rules, but instead flexibly taking steps toward her life, doing what was needed each day.

Jenn still has better days and worse days. OCD likes waiting until she is tired or stressed, and then tries to get her offtrack again. But each day, she does things that OCD told her would never be possible for her, and loves telling others with OCD that ERP can help them move toward a life that matters to them, too.

Ben Sedley, PhD, is a clinical psychologist and acceptance and commitment therapy (ACT) practitioner with over fifteen years of experience working with adolescents and adults facing mental health difficulties. Sedley’s research and practice has focused on examining children and young people’s understanding of mental health, which has helped guide him on the best ways to explain mental health concepts and ACT to young people. He is author of the teen self-help book, Stuff That Sucks.

Lisa W. Coyne, PhD, is founder and senior clinical consultant of the McLean OCD Institute for Children and Adolescents (OCDI Jr.), and assistant professor in the department of psychiatry at Harvard Medical School. She also founded and directs the New England Center for OCD and Anxiety, and is coauthor of The Joy of Parenting (with Amy Murrell) and Acceptance and Commitment Therapy (with Koa Whittingham). She lives near Boston, MA; with her family and two therapy dogs, Doog and Peach.