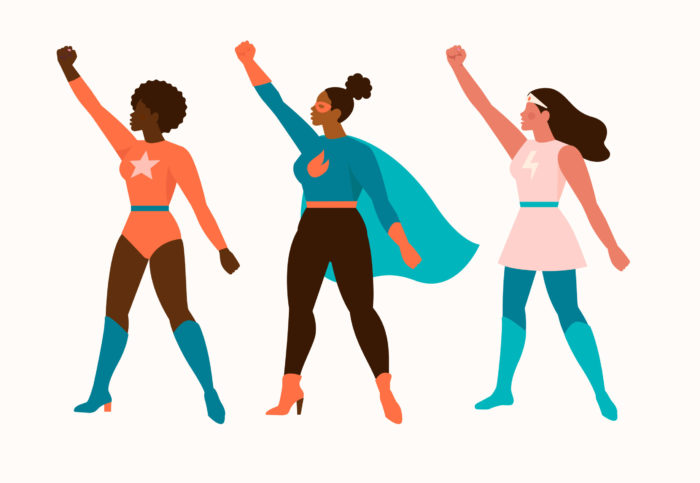 I have always loved stories—stories about amazing heroes, knights, and warriors who went on amazing adventures, defeating evil villains and saving the day.

There was only one problem—all of my favorite characters were men. In all the books I read as a child, the men were the heroes and the women only had to be rescued and to be beautiful.

I dreamt of becoming a Musketeer, of solving crimes alongside Sherlock Holmes, and of fighting dragons as one of the brave knights. When I brought up this idea to one of my neighbors, she laughed.

I was enraged. I wanted to yell about how I didn’t believe in conforming to such societal gender expectations but at eight years old, I did not have the vocabulary to express how I felt in that moment.

It was then that my grandfather, a Holocaust survivor, took it upon himself to become my first feminist role model.

He pulled me aside and said, “I have another book for you. But it is written in a secret, invisible language. And so, I will read it to you for now and when you grow up, you will be able to read it to yourself and others.”

He then took out a blank piece of paper and moved his finger left to right as if reading some kind of invisible, magic ink. He read me a story about a little girl, ME, whose brother and cousins were kidnapped by an evil monster.

I was the only one who was able to find the monster and stop him before he hurt the members of my family.

Without ever making it obvious, my grandfather taught me that sex and gender were irrelevant when it came to heroism. He taught me that our lives are like a blank piece of paper, and that it is up to us to determine the way that we show up for our own call to adventure.

For example, a few years ago, I was working with a client; let’s call her “Lisa,” even though that’s not her real name. Lisa’s parents brought her in for post-traumatic stress disorder (PTSD) after being sexually assaulted by her partner.

Lisa’s parents could not understand why their daughter developed PTSD, “After all,” they said, “he was her boyfriend.”

And they could not understand why their daughter was still exhibiting PTSD symptoms even six months after the event occurred. They tried to shame her into “getting over it.”

It did not work. In fact, it only made her shut down.

During the first few sessions, Lisa could barely speak; her voice was long buried under the oppressive stories that she was made to believe.

So, I decided to switch gears and asked her about her favorite TV shows. She mentioned that she was a big fan of Buffy the Vampire Slayer. In case you are not familiar with it, Buffy is a TV show about a teenage girl who is a high school student by day and a vampire hunter by night.

I asked Lisa to share her favorite storylines and episodes with me. And in her finding the permission to speak about her favorite series, Lisa started regaining her voice. She shared with me about Buffy’s struggle with managing her responsibilities, as well as about Buffy being an empowering role model for her.

A few sessions later, I asked Lisa whether Buffy had ever gone through something traumatic. Lisa thought about it and said that at one point, Buffy sacrificed herself to save her sister.

Sometime later, when Buffy is brought back to life through dark magic, she is not quite the same. Buffy has nightmares, flashbacks, she is angry all the time, she engages in risky and self-destructive behaviors that her friends do not understand, and she does not wish to face her traumatic experience—her suffering going on for months. In other words, Buffy meets the full criteria for PTSD.

I asked Lisa if there was ever a time when Buffy disclosed to someone else about what she had been through. Lisa said, “Yes,” and informed me that Buffy at one point confided in her friend, Spike.

I asked Lisa if we could watch that particular clip together. She pulled it up on her phone and we watched, as Buffy proceeded to tell Spike, “Everything here is hard and bright and violent. Everything I feel, everything I touch. This is Hell. Just getting through the next moment, and the one after that.”

And as we were watching this clip, Lisa pointed to the screen, tears running down her face, and she said, “THAT! That is what I feel like every day.”

It was the first time since her assault that she was able to find her voice to be able to talk about how she felt. That night, she went home and showed that entire episode to her parents, who for the first time were able to understand what their daughter was going through.

Sometimes in seeing heroes reclaim their lives in fiction, we might be able to find our voice too because for so many of us, heroes are more than fiction; they are our voice when we cannot speak for ourselves. They are the expression of our emotions that we have not been allowed to feel. And most importantly, they can facilitate our own call to freedom in changing our own narrative.

You are not helping anyone by staying quiet and fitting yourself into a story that you were never meant to be in. You are not meant to be someone else’s sidekick. You are meant to be the hero of your own story.

If you have read fantasy books, you might have read about a creature called a phoenix. A phoenix is a magical bird, believed to come from the sun. And like many of us humans, the phoenix goes through some excruciating changes every once in a while. It bursts into flames and then falls to ash. But THEN, the phoenix rises again, stronger than ever before.

In fact, sometimes our experiences—be they trauma, anxiety, or heartbreak—might feel like we are on fire. And this here, right now, this is your phoenix moment. This is you rising from the ashes, regaining your voice, and rewriting out your own story on a blank piece of paper, as if to say, I am here and I have awakened.

Janina Scarlet, PhD, is a licensed clinical psychologist, an award-winning author, and a full-time geek. A Ukrainian-born refugee, she survived Chernobyl radiation and persecution. Scarlet immigrated to the United States at the age of twelve with her family; and later, inspired by the X-Men, developed Superhero Therapy to help patients with anxiety, depression, and post-traumatic stress disorder (PTSD). She has been awarded the United Nations Association Eleanor Roosevelt Human Rights Award for her book, Superhero Therapy. Her other books include Harry Potter Therapy; Therapy Quest; and Dark Agents, Book One.