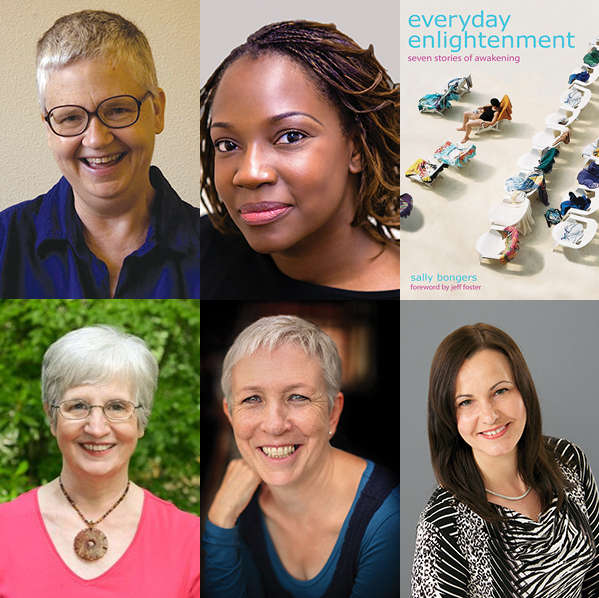 In honor of International Women’s Day, and as a follow-up to our recent blog-post, "13 Badass Psychologists…Who Happen to Be Women," we present to you 6 more enlightening authors who happen to be women.

Joan Tollifson writes and talks with people about the living reality Here / Now. She has an affinity with both Buddhism and Advaita, but she belongs to no formal tradition. Her approach is simple and down-to-earth, pointing beyond concepts and beliefs to the immediacy of direct knowing and being. Her first book, Bare-Bones Meditation, was published by Bell Tower in 1996. Joan has lived in Northern California, rural New York, Chicago, and Southern Oregon. Her main teacher was Toni Packer, but she spent time with many other teachers as well. Other titles include Awake in the Heartland, Painting the Sidewalk with Water, and Nothing to Grasp.

Cheryl Abram is a mother of four living in Northern Virginia. She is aggressively sarcastic, whimsical, and always wondering, “Why does my back hurt?” She is an author, blogger, public speaker and is currently working toward an MBA with an emphasis in naps. Her book, Firing God, was published in 2014.

Sally Bongers is a film director, photographer and cinematographer, based in Sydney. Sally studied at the Australian Film Television and Radio School, subsequently winning two AFI Awards for Cinematography. She runs her own film production company, Light Corporation, in Australia. Sally’s spiritual journey has taken her from Muktananda to U.G. Krishnamurti, Ramesh Balsekar to "Sailor" Bob Adamson and Tony Parsons. Her book, Everyday Enlightenment, was published in 2008.

Vicki Woodyard is known for her emotional honesty, and as a reader says, “Your words really strike the anahat—the deepest place in the heart.” Vicki Woodyard studied with Vernon Howard, a Fourth Way teacher. Silence is her teacher these days and she lives a simple life in Atlanta, Georgia. Her book, Bigger Than the Sky, published in 2014.

Watch her most recent YouTube video, "Be Still and Know."

Fiona Robertson is a senior facilitator and trainer of Scott Kiloby’s Living Inquiries. She works with clients and trainees from around the world using this gentle, radical, and transformative method. She cocreated the Anxiety Inquiry, and is editor of two books by Scott Kiloby. Robertson lives in Nottingham, UK, and occasionally writes poetry. Fiona's book, The Art of Finding Yourself, published in 2016.

Lithuanian-born Ilona Ciunaite has a degree in psychology and a mind-set to focus on freedom for herself and others. Ciunaite’s search for truth started in 2002, when for the first time she “experienced silence of the thinking mind, a sweet sense of being, contentment, peace,” and “feeling at home.” She’s had conversations with people from all around the globe and holds Liberation Unleashed meetings and group sessions in the UK. She and her husband run a custom tattoo studio in West Sussex. Her book, Liberation Unleashed, published in 2016