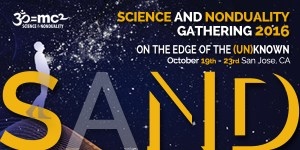 The Science and Nonduality (SAND) 2016 U.S. Conference happened October 19 through 23 at Dolce Hayes Mansion in San Jose, CA. Here, I share my reflections on the gathering as a first-time attendee and associate of New Harbinger Publications, home of Non-Duality Press.

“The SAND Gatherings create a friendly and dynamic space for openhearted, and open-ended, exploration.”

The Science and Nonduality (SAND) Gathering this fall was a much-anticipated event. This year’s U.S. conference, which took place over five days in San Jose, CA, featured daily workshops, sessions, conversations, meals, movement, and music. The theme, “On the Edge of the (Un)Known,” reflected our essentially human urge to know—that pressing desire to make sense of the world, both through science and spirituality—and also, that the more we seem to know, the more we realize we don’t know. “We all constantly touch the Edge of the Unknown,” the SAND team wrote, inviting us to explore that edge in a multitude of ways, with the acknowledgment that reality is beyond any description in mind. As always, this gathering brought the opportunity to hear a wide range of speakers on a variety of subjects, including Deepak Chopra, Dorothy Hunt, Peter Russell, Larry Dossey, and many others. 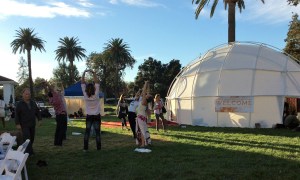 A group stretches outside the “Welcome” dome, as Peter Russell walks by.

Scott Kiloby has held many titles, including speaker, teacher, and author, but his calling is helping the millions of people who are struggling with addiction. His pre-conference workshop, “Tools of Insight and Realization from the Kiloby Center for Recovery, Inc.,” addressed addiction and trauma from the perspective of non-dual awareness, guiding us to investigate that which has not been observed in our consciousness—to explore the words, pictures, memories, and stories that keep us feeling separate and deficient; to feel the feelings, and experience the space around them. Later in the conference, Kiloby also appeared on a panel: “How Generational and Early Life Trauma Shape Our Lives,” with Richard Miller, Mark Wolynn, and Ajaya Sommers, facilitated by Julie Brown Yau. 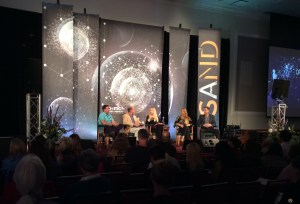 Non-duality teacher Rupert Spira, who has spoken at the SAND gatherings for several years, offered a pre-conference workshop (“The Essence of Non-Duality”), morning meditations, an evening plenary session (“The Nature of Consciousness”), and more. Spira’s approach is clear, direct, and provocative, a stream of wisdom distilled into crystalline pointers that illuminate a basic truth—that awareness is the common element of all experience—and inspire us to check this in our own lives. He compared the knowing of experience—the unchanging awareness through which all experience is known—to a dreamer’s mind: just as a dream takes no space or time in the dreamer’s mind, our thoughts, feelings, and perceptions—our experience of ourselves and the world—arise within consciousness, but do not affect it. Both Spira and his teacher Francis Lucille (who held a Q&A and several sessions later in the conference) spoke of the understanding that awareness is the only aspect of experience that does not come and go. 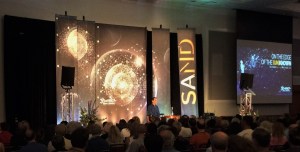 Rupert Spira in Hayes Ballroom, presenting “The Nature of Consciousness.”

Each day of the conference featured an abundance of offerings, from morning til night. On Friday, Amoda Maa Jeevan’s “Surfing the Heart of Darkness: Suffering as a Doorway to Liberation” ended with a discussion of suffering as an invitation, an opportunity to open to our experience and stay open, without trying to fix or change it; and to find liberation through letting go of agenda and expectation—to stop trying to make things happen in order to feel worthy. In John Prendergast’s “Closing the Gap Between Our Deepest Knowing and Our Daily Lives,” he posited that we’re already whole, just as we are, and through no effort at all. Then he led a guided meditation in which we scanned our bodies for constrictions, let them go, and felt ourselves be held. Jac O’Keeffe’s “Freedom Framework” invited us to be pioneers, to step out of time, and to question all of the teachings, since there’s no need to rest our identity on any of them. 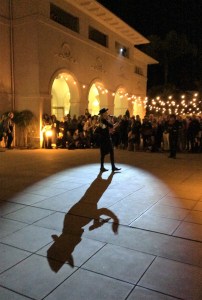 Rafe Pearlman of the shamanic duo MIM: Music is Medicine (with Zia Suneri).

The explorations and dialogues continued on Saturday, with sessions including author Deborah Rozman’s “Heart Intelligence: Connecting with the Intuitive Guidance of the Heart,” Loch Kelly’s “The Unfolding After Initial Wakening,” Scott Kiloby’s “Addiction and Trauma,” and an evening plenary session that began with Francis Lucille’s “Innocence and Spontaneity of Not Knowing.” That night’s program featured the entertaining “Panel of Three Gurus,” with JP Sears, Swami Beyondananda, and David Ellzey, facilitated by SAND founder Maurizio Benazzo. These four took a lighthearted approach to the subject matter of science, non-duality, and spiritual enlightenment, emphasizing the playful side of the gathering with jokes about “mindfullessness” (“It’s basically mindless,” said JP Sears) and “the universal oneness” (“If I’m one, then you’re one, too,” said Swami Beyondananda). This was followed by a theatrical performance by MIM: Music is Medicine, and the “On the Edge of the Unknown” dance party, with music from DJ Dragonfly. 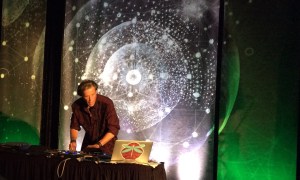 DJ Dragonfly, at the “On the Edge of the Unknown” dance party in Hayes Ballroom.

Sunday’s presenters included author Cheryl Abram, whose session “Firing God” began with an early memory of being a girl in the South, driving by a lodge with her family, and seeing a sign that read “KKK Meeting”—how the atmosphere in the car changed then, and how that’s still happening today. She went on to describe how awakening can occur, even in the midst of personal and social injustice. 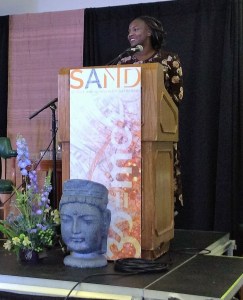 Author Joan Tollifson’s “The Freedom of Nothing to Grasp” covered the idea that not knowing is at the heart of science and spirituality, and that everything boils down to what is right here, right now. Stephan Bodian, an author, spiritual teacher, and licensed psychotherapist, presented “Beyond Mindfulness: The Paradox of Practice in the Direct Approach.” He advised that while meditation and practice can be helpful, especially as tools to deal with difficult thoughts and emotions, it’s best if we “don’t make a habit of it,” as his teacher Jean Klein would say. Rather than marking our progress and developing a spiritual ego, Bodian suggests the practice of resting as awareness—becoming aware of that which is aware, and welcoming what is. 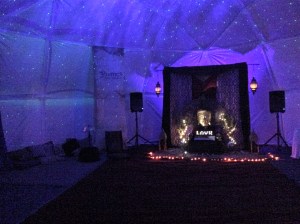 Inside the beautifully illuminated dome.

Overall, SAND 2016: On the Edge of the Unknown was an awesome experience, and a welcome opportunity to learn more about the Science and Nonduality community. Throughout, the common themes of searching (for ourselves, peace, truth, divinity, or an understanding of the universe), suffering (especially when we’re trying to control the circumstances of life), and the relief that’s possible through allowing ourselves and our experiences to simply be as they are, made the conference relatable to an audience of diverse background. Most notably for me, whether through workshops and sessions, conversations over lunch or dinner, or simply in passing, the gathering offered amazing chances to meet and engage with the authors, teachers, speakers, and “ordinary” people who have taken up these explorations on the edge of the unknown and are working to share them with the world, including Julian Noyce, founder of Non-Duality Press. “I always come away from these gatherings refreshed and inspired by listening to perspectives that seem very different—from Francis Bennett’s Christian mysticism to the valuable psychotherapeutic insights of Mark Wolynn. The SAND Gatherings create a friendly and dynamic space for openhearted, and open-ended, exploration,” said Noyce.