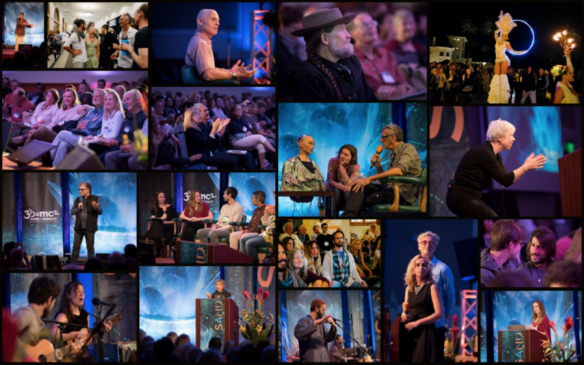 by Elizabeth Fitzer, editor of the Non-Duality Press blog

If you’re like me and so many others, the stories of the past year have been difficult to process on every level—the mental, physical, and spiritual; the personal and political; the individual and collective. So it was no exaggeration when Non-Duality Press posted that we were “overjoyed” about the arrival of the Science and Nonduality Conference (SAND17 US).

As founder of Non-Duality Press Julian Noyce said last year, “The SAND Gatherings create a friendly and dynamic space for openhearted, and open-ended, exploration.” That certainly proved true for this year’s conference, and it was right on time.

SAND17 US: The Emergent Universe occurred October 18 through 22 at Dolce Hayes Mansion in San Jose, CA. Here, I reflect on the gathering as an attendee and associate of New Harbinger Publications and its imprint Non-Duality Press. 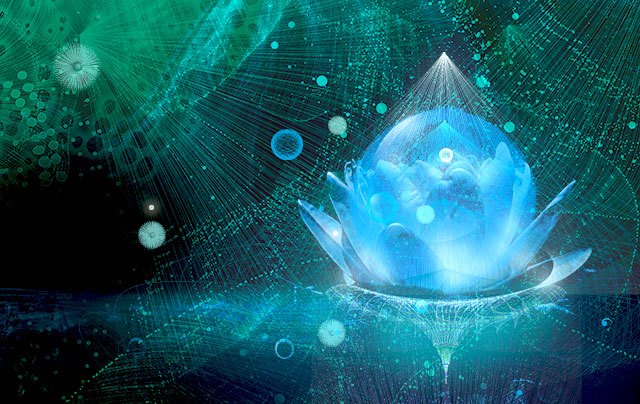 From SAND17: The Emergent Universe

That which is emergent is that which is newly forming or rising to the surface, suddenly appearing or just now coming into awareness. As Science and Nonduality puts it in the video “Emergence,” we are each a “unique emergent expression of life.” Yet even in our individuality, our oneness is undeniable: we are all connected. And it is through this interconnectedness—the way we interact and affect one another—that the emergent universe is created anew in each and every moment. As in the book by presenter Deepak Chopra and Menas Kafatos, You Are the Universe.

SAND gives us an opportunity to reflect on this, paradox and all—to come together in the recognition of our utter inseparability, to celebrate what distinguishes us from each other, and to encourage and support one another in our evolutionary awakening, with all of the tools and technologies available. 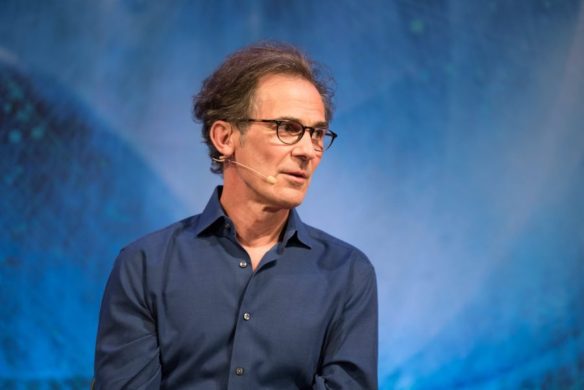 This year, New Harbinger and Non-Duality Press were beyond happy to see so many of our authors in action again, to that end: Scott Kiloby called on us to “Join the Evolution!” and address our individual shame and trauma—two significant factors that drive addiction. In “Encapsulation to Boundlessness: Emerging from the Dream of Separation,” Joan Tollifson invited us to explore our experience of awareness as “the boundless wholeness of being,” the “dance of emptiness” that is the ever-evolving universe, here and now. Amoda Maa asked, “What Does It Mean to Be Fully Awake and Fully Human?” and touched on the idea of self-divestment. And of course, what would SAND be without Rupert Spira’s elucidations on The Nature of Consciousness? 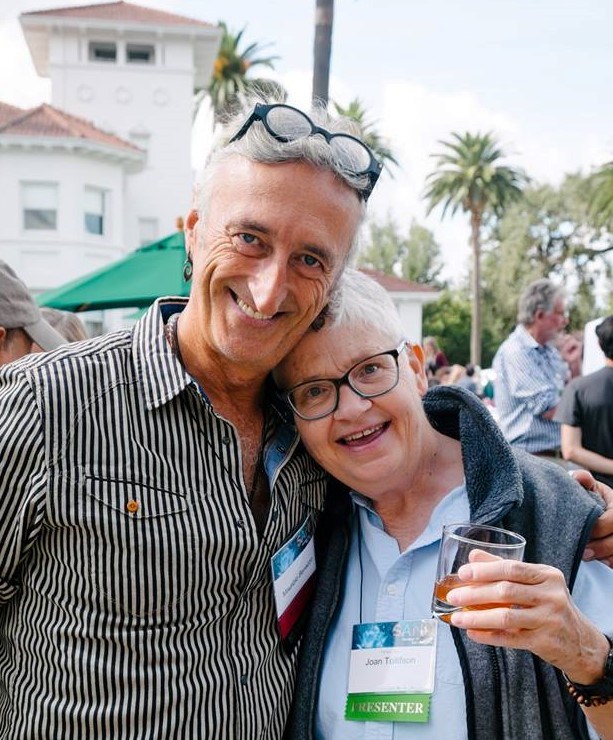 It was also a pleasure to see our new and forthcoming authors at SAND17, including Bonnie Greenwell, whose session on “The Emergent Human: Transformation and Awakening into the World as It Is” explored different transformative phenomena that can occur, and reminded us of the free presence that we are, the “original consciousness” that we share. “This place of perfect equanimity, peace, and spontaneous response to life—it already exists within you,” she said.

But what of “The Inconvenient Truth of Nonduality,” as presented by author and founder of Inner Light Ministries Deborah Johnson? In a world where we’re inevitably connected, yet divided by disparate beliefs and ideologies, what do we do—how do we engage and affect one another, without getting “nasty”? Or, as the session title put it, “What If I Don’t Want to Be One With Them?” 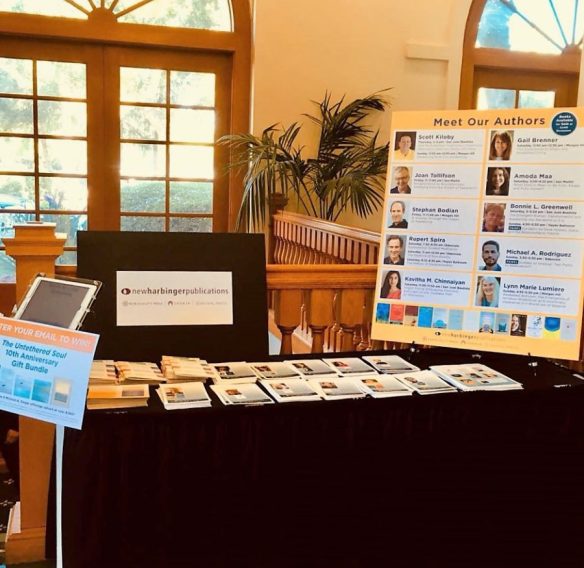 Partisan politics, the gender binary, even the progressive path versus the direct path—the apparent gravity and multitude of the concepts that drive division can seem overwhelming and insurmountable at times. Which is what makes it even more important to find a way to hold it all—to acknowledge every aspect of ourselves, especially our shadows, and bring them into the light.

The Mahavidyas (ten wisdom goddesses) of Kavitha Chinnaiyan’s Shakti Rising: Embracing Shadow and Light on the Goddess Path to Wholeness help us to do just that. This presentation of the divine feminine and their intense, paradoxical imagery—including Kali, a goddess who lives in cemeteries; and Bhuvaneshwari, who represents space, carrying a goad and a noose—called us to awaken to “the reality that encompasses all dualities,” including our “impurities.” 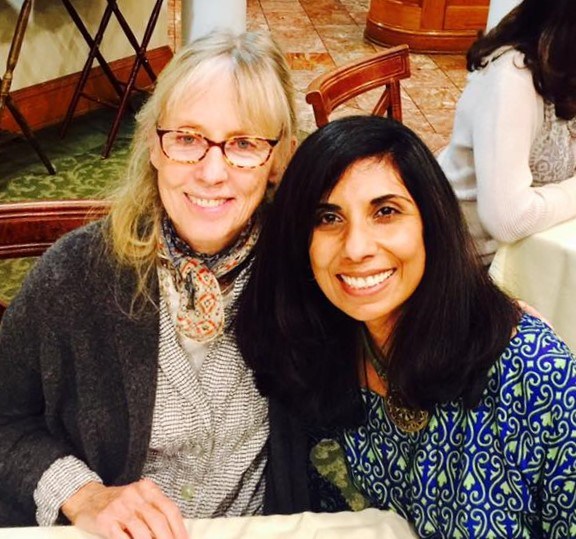 “It’s not an either/or question; it’s a both/and question… I think that safeguards us from becoming fundamentalist,” said Michael A. Rodriguez in the panel discussion “Sudden or Gradual: Two Paths to Realization?”—with David Buckland and Isa Gucciardi, facilitated by Rick Archer (here with Amoda Maa on Buddha at the Gas Pump).

In her session “The Experience of Anger and Awakened Living,” Gail Brennerencouraged us to accept the “invitation of anger,” which can show us where we’re holding on to our sense of separation, with all the “I” thoughts that feed it. By turning toward our anger with attention and curiosity, we can change the way we relate to it and create a “moment of choice,” a place from which we can act with greater wisdom.

Amoda Maa also spoke of opening to the energy of anger, without diving into or acting on the beliefs inside of it, reminding us that “wherever we feel righteous, is exactly the place we’re holding back the love.” In this way, even our anger, when explored wisely, can point us toward freedom.

“Let’s have the courage to rattle everything”—Jac O’Keeffe

To self or not to self—that is the question (among many others!). And at SAND, there’s space for all of it—so why not question everything? In her session “The Future of Non-Duality Lies in Recognition of Its Place in the Greater Scheme of Things (And Non-Things!),” Jac O’Keeffe encouraged us to cultivate honesty, integrity, and spiritual wisdom—to use discernment, hang on to our own authority, and check it with our own experience, using trial and error. “Let’s have the courage to rattle everything,” she said. “Let’s be more creative. Let’s be more influential.” 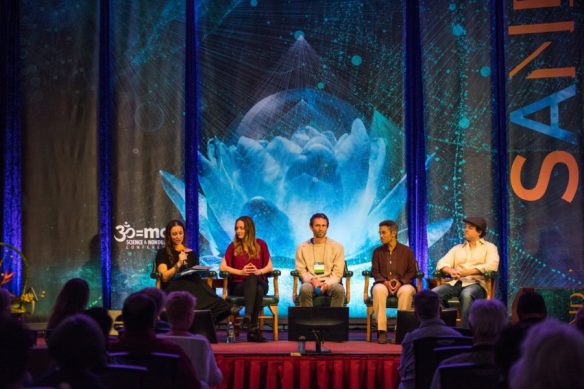 A Call to Action

One of the most personally significant themes that arose at SAND17 was the idea of activism as a moral imperative. In the panel discussion “Sacred Activism”—with Deborah Johnson, Charles Eisenstein, Caverly Morgan, and Rory McEntee; moderated by Vera de Chalambert—Johnson urged us to “listen with the ears of HOPE [Heart, Open, Possibility, Engagement]” and stay involved; to have a vision of where we want to go and to live that reality, rather than fixating on a particular perceived enemy.

Also moving was Lynn Marie Lumiere’s presentation “Awakened Activism: The Emergence of Nondual Wisdom as an Evolutionary Imperative in a World Out of Balance.” Lumiere outlined the issues we face on a global level, while at the same time emphasizing that there is really only one problem—the belief in separation—and one solution: to wake up to the unity of all life.

“Awakened activism is awakening to our true, empowered, infinite nature, and creating a world that is a reflection of that nature,” Lumiere said. Urging us to look deeply into our own lack of compassion and empathy—our own “me first” tendencies—she provided steps we can take toward being of service and taking responsibility and empowered action, when somehow “all is well, and the heart breaks.” 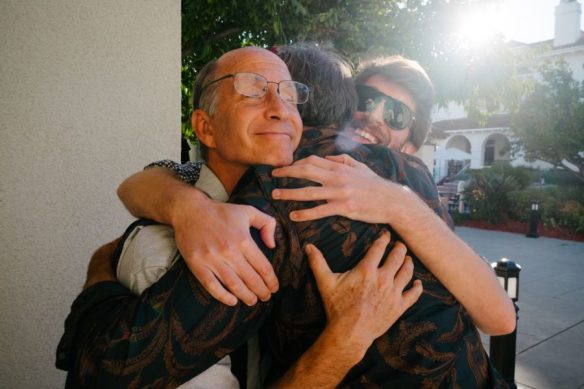 What a gift—to gather with the seers and the seekers; the scientists and philosophers; the authors, speakers, and teachers of the SAND community in exploration of the nature of being and the universe. And what an awesome way to come together and experience the truth at the mystical heart of so many of the world’s traditions, both ancient and new: we are one.

It’s that “deeper sense of belonging,” that “exquisite sense of awe” that Science and Nonduality describes as emerging “when the mind dissolves the concept of separateness and starts seeing life as one interdependent whole”: a “radical unity.”

Thank you, Science and Nonduality, for SAND17—yet another chance to acknowledge and celebrate all that makes us unique while basking in the loving reality of nonseparation. 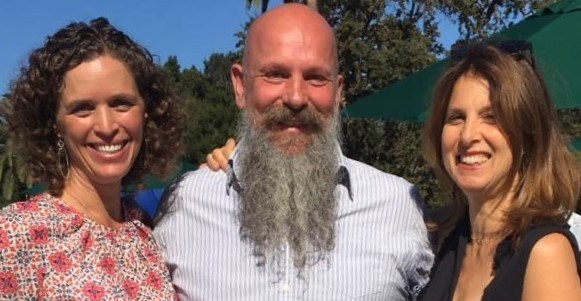 “Stop acting so small. You are the universe in ecstatic motion.”—Rumi