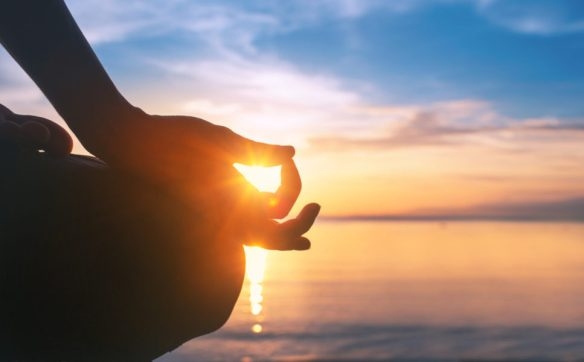 Many spiritual traditions offer silent retreat as the basis of their teachings. Most often, some kind of meditative practice is central to this—a way to still the mind and be more present. In the privileged Western world, silent retreat is mostly a luxury—something “spiritual” that we do when we have the time to get away from the busyness of our everyday lives in order to de-stress or find a higher state of consciousness. But for me, as a “spiritual teacher,” silent retreat is much more than this—it is a necessity, for each of us as individuals and for humanity as a whole, if we are to play a part in the transformation of the world.

Most people are lost in the matrix of their thoughts, beliefs, opinions, preferences, and grievances; it’s a prison characterized by stress, struggle, anxiety, confusion, and argument—in other words, it’s a state of inner division in which there’s an identification with the many “voices in the head” (which are often in opposition to each other). Seven billion people in a divided state creates a divided world; we see this in our social, economic, political, environmental, and religious arenas—this is the matrix of the world, and the outcome is war. We cannot end the war within or the war in the world without first freeing ourselves of the prison of identification with “psychological form” (thoughts, beliefs, opinions, preferences, and grievances). Discovering a dimension deeper than psychological form is vital for our own survival and for the survival of humanity.

The good news is, this deeper dimension is actually our natural state. Our natural state is the unending openness of being—in other words, consciousness itself. This consciousness exists prior to thinking and feeling, and even prior to self-awareness. It’s what is always here when you stop giving your attention to the movement of mind. It’s what happens when you are immersed in beauty, when you’re still in nature, when you’re running or dancing or making love. And very often, it’s what happens in the intensity of pain, trauma or shock, or a near-death experience. It can, of course, also be revealed in the midst of meditation. For some, the practice of meditation is a very useful tool. But many meditation practices do not use silence as the fundamental teaching—and even if they do, for many people meditation is far from silent!

Silent retreat has the capacity to go deeper than meditation practice. For me, it is not meditation itself that is the vital part, but the very nature of silence itself. It’s not about getting rid of thoughts or even about quieting the mind; it’s about falling into an inner dimension of beingness, like falling into the depth of the ocean—thoughts are the waves on the surface, beingness is the stillness and silence at the bottom. The more we rest in this silence, the more we come to know it as our essential nature. It is this silent core of being that remains unmoving and unbroken throughout the glories and tragedies of “my life.” When we keep coming back to this silence, we become more rooted in it, even in the midst of the vicissitudes of life, and eventually it is recognized as the backdrop to the movie of “me,” and gives rise to the true fulfillment of our innate wholeness. It doesn’t necessarily make our lives “perfectly happy” or “perfectly successful,” but it does free us from the prison of erroneous identification with psychological form (thoughts, beliefs, opinions, preferences, and grievances), thus ending the war within and revealing a peace and joy that is not dependent on circumstances.

Silent retreat is the opportunity to notice what keeps your attention at the surface, to be honest with yourself about what prevents you from falling into your innermost depth, and to practice surrender of the mind’s safety-seeking strategies while being held in the loving spaciousness of the “container” of the retreat itself.

The invitation to fall into the silence at the core of your being is a coming home to your natural state. And when we move from this silence into the world, the reverberations are revolutionary!

Join Amoda for her upcoming silent retreat this December:

Coming Home to the Core of Your Being 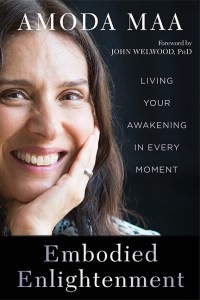 Amoda Maa Jeevan is a contemporary spiritual teacher, author, and speaker who recently appeared at the Science and Nonduality Conference in San Jose, CA (SAND17 US).

Embodied Enlightenment: Living Your Awakening in Every Moment is based on both her vision for humanity and the conversations on the cutting edge of spiritual inquiry in her meetings with people from all around the world.