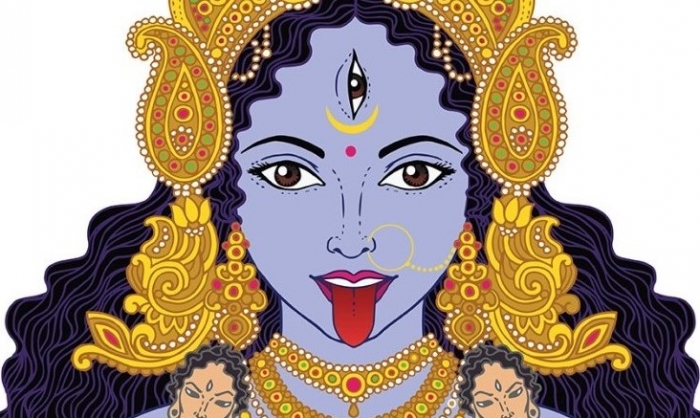 Who gets to define the feminine divine?

If you’ve been in a bookstore lately or even on the Internet, you’ve probably heard about embracing the divine feminine. We are asked to step into our goddesshood in innumerable ways, from the way we dress and feel about ourselves to the way we talk and walk and go about living our lives. We are taught how to tap into our feminine selves.

This is a much-needed cultural, social, and spiritual revolution. However, it begs the following question—how do we define the feminine, especially the divine kind? And who gets to define it?

Myths and stories have saturated our minds with the supposed magical qualities of the goddess—an epitome of beauty with sensual curves and a lovely visage framed by a cascade of perfect hair; a lover par excellence and an exemplary mother, she is at once a tender flower and a fierce warrior against injustice. The goddess isn’t merely ethereal in appearance; she also wields extraordinary powers over nature. Importantly, she is worthy of worship.

We have no standards for the goddess other than those created in patriarchy.

Naturally then, we may find that, despite being barraged by popular culture to open to the goddess, we are simply unable to identify with qualities that are impossible to achieve if we are not endowed with beauty, strength, or power as they’ve been conventionally defined.

As if the conventional problems of patriarchy in making us feel less than perfect are not enough, the goddess becomes yet another avenue for us to view ourselves with disdain for being deficient, incomplete, and imperfect.

Can the goddess be plain, destructive, conniving, entrapped in the confines of time and space?

On the other hand, the goddess has the potential to become a vehicle for spiritual bypassing, where our own unexamined sense of lack or low self-worth is replaced by her imagined qualities, creating false or contrived personas for acting and living in the world. Instead of digging deep into our insecurities and seeing their baselessness, we learn to cover them up with an exaggerated sense of self-worth. In addition to not resolving any of our deep-rooted issues, spiritual bypassing comes with the fear of losing this goddess mantle and returning to our dreaded ordinariness. The pain and insecurity we wish to push away or forget lurk just behind the goddess persona, ready to burst through with the slightest provocation.

The goddess brimming over with beauty, power, goodness, and light thus continues to remain a fantasy, an impossible goal to achieve. At some point, we may be tempted to ask—can the goddess be plain, destructive, conniving, and entrapped in the confines of time and space?

Few, if any, myths describe the goddess as being an embodiment of our darkness as much as the beauty and strength that we seek. If the goddess is much like us, what would we learn from her? What if the shadows and the light she embodies are universal, whether we are male or female? What if we tread the goddess path to discover that who we are is beyond the confines of the binary? How would we inhabit our bodies and minds while still breaking through the conventional norms of gender, race, age, beauty, grace, power, and peace?

This is where the Dasha Mahavidyas come in. Translating to “the ten wisdom goddesses,” the Mahavidyas are a peculiar group of goddesses that defy all conventional norms and definitions of what it means to be feminine.

In Sanskrit, Shakti is the creator, sustainer, and destroyer of the universe.

In Sanskrit, the supreme force that rules over creation is called Shakti. The word literally means “power.” Shakti is the creator, sustainer, and destroyer of the universe. Importantly, she is the creator, sustainer, and destroyer of our persona—the one that keeps us so effectively trapped in familiar ways of thinking and acting that we forget our divinity. The persona that we take to be who we are is a cover-up for who we really are, which is eternal bliss consciousness. Shakti is not just the great concealer of our divine nature; she is also its great revealer. Shakti’s ten great forms that represent various forces of creation are known as the Mahavidyas.

What sets the Mahavidyas apart from other goddesses is their singular fierceness. Their disheveled and naked bodies, lolling tongues, garlands made of skulls or human heads, and violent imagery cut through any binding concepts we may have of the divine feminine. Hidden in their iconography are the secrets of both the concealment and discovery of our divinity.

The only way to open to the light is by embracing our shadows.

By embodying the opposites of shadow and light, the Mahavidyas show us that one cannot be had without the other, be it in the world or within ourselves. The only way to fully open to the light is by owning and embracing our shadows. In their insistence on reconciling opposites, the Mahavidyas leave no room for spiritual bypassing. Through their “in-your-face” iconographies, they transcend all superficial definitions of the word “goddess,” defying patriarchal norms of beauty, power, strength, and forbearance.

Take Kali, for instance. Few goddesses have stirred up the collective subconscious of goddess worshipers as she has. Fierce and wild, Kali is worshiped as the embodiment of all that is rebellious in us. She is known to strip us of our false personas if rightly invoked. There are plenty of stories floating around about the compassion and grace that accompany her merciless beheading of any pretenses that make up our identities. As a Mahavidya, Kali symbolizes time, the great cosmic force. She is often depicted as a wild-haired woman with bloodshot eyes and fangs, a bloodied sword in one hand, and a freshly severed head in the other. Strewn around her are corpses, presumably her victims.

Every time we judge ourselves on contrived concepts of propriety, we fall prey to Kali’s shadow.

In our psyche, Kali represents the shadow of aggression as well as the light of nonviolence. Being entrapped in our past stories of hurts and slights, with the hope of getting even in the future, forms the very basis of violence. As time, Kali creates the illusion of a continuity between the past and the future, where we feel like we are on a linear timeline. Her dance among the corpses is telling—she beheads every moment, so that the next may be born. Standing on the corpses, she reminds us of the dead stories we carry around about ourselves. Even though the events behind the stories are long gone, we carry their wounds, which become the basis for how we behave in the present. Kali’s shadow of aggression makes us think that who we are today is a product of our parents, our culture, or world events, even when they occurred so long ago that nothing remains of them except memories. We dance on these corpses, viewing ourselves and others through the lens of judgment and comparison. Every time we judge ourselves based on contrived concepts of propriety, we stir up the corpses in our own personal cemetery and fall prey to Kali’s shadow.

The Mahavidyas are unique in that they show us the only way out is through. Kali simply doesn’t allow us to fake nonviolence or to neatly push away even our microaggressions. She forces us to clean up our acts by making us acutely aware of our own darkness. Every time we point a finger at someone, she bubbles up in our inner vision, her deafening laughter ringing in our inner ears. She mercilessly beheads our every attempt to ignore or bypass our issues, forcing us to wake up from the tyranny of time. She keeps at it until we do, until we have stepped out of her linear timeline entirely, for only then can we become truly nonviolent. She does away with all superficial definitions of the word, forcing us to see that, as important as kind words and deeds are, true nonviolence can only arise from being free of the hurts of the past and the hopes of the future. Kali’s radical nonviolence shows us that all aggressions and transgressions arise from being trapped in her shadow. We see that patriarchy is just as much a product of her shadow—Kali’s dance is evident in all manner of violence, whether it is a politician or lawmaker spewing hatred and divisiveness, or our own petty jealousies and temper tantrums.

When Kali stops her dance, we see that neither the past nor the future exist in the eternal now.

This understanding results in a radical shift in perspective. It evokes compassion for the perpetrator as much as for the victim. It forces forgiveness and opens creative ways of dealing with injustice. Social and cultural activism are infused with sweetness instead of righteous anger. Our own shadows thus become our allies when we embrace them. They form the catalyst for a deep makeover of our thinking and being. When Kali stops her dance in the cemetery, we come to see that neither the past nor the future exist in the eternal now. With the disappearance of linear time, we stop believing the stories we have been telling ourselves about who we really are. Our parents, culture, and world events are forgiven with the understanding that they, too, acted under the influence of Kali’s shadow.

Be it Kali’s fierceness, Bhuvaneshwari’s deceptive beauty, or Dhumavati’s uncouthness, each Mahavidya forces us to question our ingrained concepts about what it means to be a goddess. By breaking the chains of cultural and social norms that limit and define our identity, they open us to ever-deepening levels of inner freedom. The very darkness that we had tried to push away opens us to the light in ways we couldn’t have previously imagined.

It is about being rooted in authenticity.

The Mahavidyas’ radical lesson is this—embracing the divine feminine doesn’t look a particular way. It isn’t a false ego boost for those suffering from low self-worth. It isn’t about violent or hysterical rebellion against patriarchy. It’s certainly not about dressing, speaking, or behaving in patriarchally determined feminine patterns. It is about being rooted in authenticity.

What remains when all the concepts and beliefs we have been taught about ourselves are washed away? We come to see that who we are has no name, form, or gender. This light of understanding shines through us—through our unique shapes, forms, and life circumstances—and dances as unpredictably as Kali in the cemetery. Embracing the divine feminine is about being true only to that light of understanding, and refusing to be influenced by anyone or anything else. 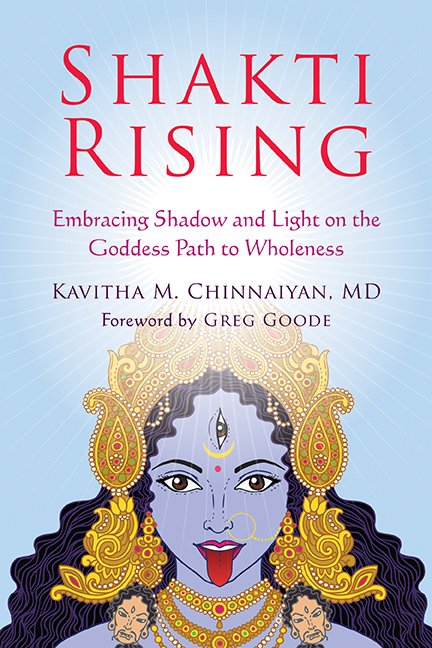 Kavitha M. Chinnaiyan, MD, is an integrative cardiologist who blends her medical expertise with her knowledge of yoga, tantra, and the Direct Path to help patients discover the end of suffering. She is author of Shakti Rising.