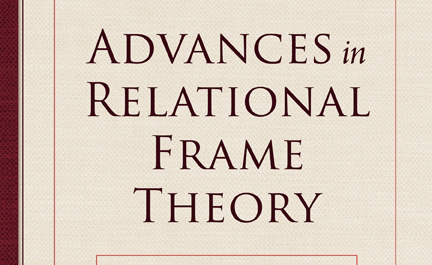 Over the past few weeks, we’ve published a series of posts presenting an overview of Relational Frame Theory (RFT) in terms of history and theoretical foundations. We’ve aimed to provide a basis for understanding the necessity of a theory that can help us understand how language connects us to our environment. We mentioned just a few of the practical applications of RFT, including better understanding rule-governed behavior, verbal behavior in developmentally-delayed children, analogical reasoning in typically developing children and adults, and assessment and training of intelligent performance, to name a few. In their chapter of Advances in Relational Frame Theory: Research & Application, Denis O’Hora, Kristen Maglieri, and Triona Tammemagi take the RFT discussion a step further by presenting current and future RFT research in organizational behavior management in workplace settings.

The practical application of RFT in the workplace is most readily seen in the application of therapeutic interventions based on ACT (Hayes, 1987; see also Blackledge & Drake, 2013). Such interventions have proven to be effective in the improvement of psychological distress (e.g., depression, anxiety; Hayes, Masuda, Bissett, Luoma, & Guerrero, 2004).

The defining characteristic of all organizations is that individuals work together to achieve a common goal. Organizational behavior management (OBM), the application of behavioral principles to organization behavior (Bucklin, Alvero, Dickinson & Jackson, 2000), attempts to identify the critical contingencies in the employee’s environment that can be adjusted to enhance satisfaction and productivity. The promise of OBM is that, by providing functional analyses of ineffective organizational contingencies, interventions can be designed to transform those contingencies into effective systems. But for years, OBM researchers have recognized that much employee behavior is indirectly controlled by verbal statements of one kind or another (e.g., rules). People at work are constantly exhibiting complex verbal behaviors: thoughts, feelings, beliefs, attitudes, judgments, biases and values. Workers’ behavior, verbal or non-verbal, is constantly changing and influenced by multiple sources; and thus, organizational contingencies are exceedingly intricate.

Therefore, RFT is particularly well-suited to address such complexities; it provides a behavioral account of reference—how words “mean” what they “stand for.” And it articulates how such “meanings” can establish novel behaviors and novel consequences for individuals in the workplace. RFT proposes that understanding verbal statements (rules) changes how stimuli in our environment affect us, which changes our behavior. Understanding that “quarterly returns” are important, for example, may encourage employees to engage in behaviors that maximize such returns, and to neglect other behaviors.

For this purpose, O’Hora, Maglieri, and Tammemagi present the recent research on organizational behavior influenced by RFT within three main themes:

Research Round-up: ACT in the Workplace

Dahl, Wilson, and Nilsson (2004) conducted an evaluation of a brief, four-hour ACT intervention on employees who were at risk to be put on long-term disability due to stress and pain symptoms. The intervention led to a reduction in the number of sick days and fewer medical visits at post treatment and at 6 month follow-up, compared to the control condition.

Hayes, Bissett and colleagues (2004) compared the effects of an ACT intervention and multicultural training on burnout and stigmatizing attitudes of substance abuse counselors toward their clients through day-long workshops in which participants were assessed at the beginning, end and at a 3-month follow-up. Stigmatizing attitudes in the ACT condition did not improve at posttreatment, but did significantly improve by 3-month follow-up. The opposite occurred with the multicultural training group. There was a significant improvement in burnout within the ACT group at posttreatment and follow-up.

Ruiz, Rios, and Martin (2008) described an evaluation of an ACT-based intervention in a Spanish hospital. The intervention was found to be effective in preventing the development of burnout among workers in a palliative care unit. It was notably effective in reducing feelings of depersonalization and increasing feelings of personal accomplishment.

Brinkborg, Michanek, Hesser, and Berglund (2011) investigated the effect of a brief ACT training as an intervention with 106 social workers experiencing stress, one third of whom had been on sick leave for an extended time in the past, in more than half of the cases for stress-related reasons. At post-treatment, the ACT group had significantly fewer mental health problems than the control group. Upon separating the participants’ data into high- and low-stress level groups according to baseline stress level, Brinkborg et al. found that participants with different levels of stress responded differently to the ACT intervention. It was concluded that in the high-stress group, a substantial proportion (42%) improved to a clinically significant degree, but those with low pre-intervention levels of stress did not significantly improve.

Most recently, Lloyd, Bond, and Flaxman (2012) assigned 100 government customer service workers to an ACT group or a waitlist control group. The ACT group showed significant reductions in burnout and strain compared to the control group.

Dahl, J., Wilson, K. G., & Nilsson, A. (2004). Acceptance and commitment therapy and the treatment of persons at risk for long-term disability resulting from stress and pain symptoms: A preliminary randomized trial. Behavior Therapy, 35(4), 785–801.