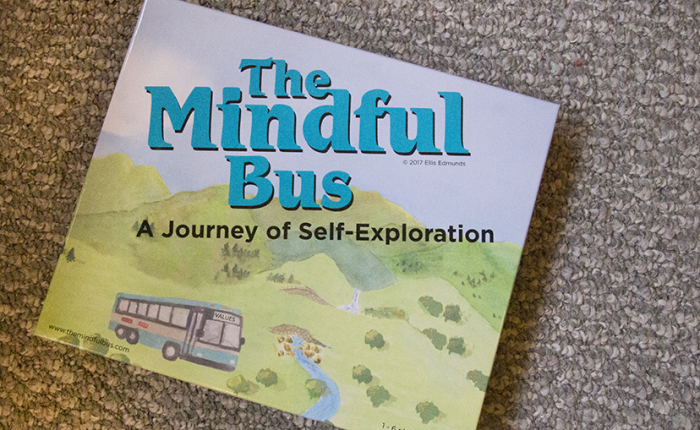 Ellis Edmunds, PsyD, developed an acceptance and commitment therapy (ACT) board game called the Mindful Bus. (The “passengers on the bus” is a well-used ACT metaphor, but we’ll get to that later.) The game can be played with therapists and their clients, with couples, with friends, or family. New Harbinger visited Ellis’ Oakland office to play the game and learn more about it.

How did you get the idea for the game?

EE: During my childhood I grew up playing a lot of board games and card games so I have always been passionate about games. In my adult life, there were a few experiences that led to the idea for the game. First was my background in mindfulness practice, which I began practicing as an undergraduate at UC Berkeley. Second was my experiences working with adolescents during graduate school. I learned that games could provide a good way to build rapport and could be used in a therapeutic context. Third, when I began studying ACT in graduate school I thought the hexaflex looked like a game board and thought that the six processes could be used to create a game. That’s when the idea of creating an ACT game first popped into my head.

What is the ACT mindful bus metaphor?

EE: It’s based on the passengers on the bus metaphor in ACT. The bus represents your life, and you are the bus driver. Your job is to determine which direction you want your bus to go—toward your values and things that are important to you in life. On your bus, you also have passengers—thoughts, memories, feelings—and those passengers often come up and try to tell you which direction to drive your bus. Your job is to use mindfulness skills to let go of and not buy into what they’re telling you while also determining which direction you want your bus to go.

The bus metaphor is central to your board game. How?

EE: In the game, your whole journey is based on this bus ride. Things start off kind of slow and mucky but then you get into a clearing up here (Edmunds points to different sections of the board) and then you get to some mountains. All the time, you’re making your way toward a rich, fulfilling life and once you complete the game, then you start living your life.

So the goal of the game—and in real life—is to have a fulfilling, rich life, whatever that means to you.

EE: Right. Whatever that means to you—and the game helps you decide what your values are and which direction you want to go.

Who is the game meant to be played by? Just for therapists and clients?

EE: No, this game is for anyone who wants to have a therapeutic, supportive experience. You could even play by yourself. You could play it with a support group, your family members, or couples could play it together.

Setting Up the Game: Identifying Values

EE: The first thing you do is fill out the player profile. (See example below.)

You start by thinking about your values. What area of your life is important? Which area of your life do you want to focus on when you’re playing the game today? It could be family, friends, career, health, spirituality… Write them down. Secondly, identify adjectives that describe what kind of person you want to be in that area of your life. Lastly, think about actions you could take that relate to the values. Write one small, easy action and one bigger action that takes a little more effort, both relating to the values you’ve identified. Then you write down a thought that might come up that stops you from taking action on each value.

Write one word from your values on a sticker label and put the label on your bus—just like a real bus that has a label at the front of which direction it’s headed in.

How do you take a turn?

EE: Pick one of your values, tell the other players what your value is, and then determine whether you want to take a small action or a big action toward that value. If you take a small action, roll 1 die. If you take a big action, roll both dice. Players make their way around the board by committing to actions and using mindfulness skills (by reading the game cards) to navigate the thoughts and feelings that might get in the way of those actions.

One of Ellis’ identified values, for example is staying healthy and fit, and his committed action is running around Lake Merritt. A thought that might get in his way is “I don’t feel like running. I feel like a lazy sloth today.”

He picks up a card that reads: Notice what feelings arise in relation to the thought. Just notice what the feeling looks like.

Another time, Ellis commits to exercising three times a week, his big committed action, and then he rolls.

What happens when you land on “avoidance”?

EE: You have to say one way that you’re avoiding the actions or the thoughts associated with the action, and then you have to go backwards one roll. Hm, my biggest avoidance strategy (when trying to exercise) is to stay at my computer and do work.

I read his card for him.

Imagine that this thought is a giant monster that you are playing tug-of-war with. There is a large pit in between the two of you. The more you pull on your side of the rope, the more the more the monster pulls. Notice the struggle. Now imagine just dropping the rope completely. Notice what happens when you drop the rope.

We go around a few more times, and we stumble upon another ACT metaphor that strikes a cord.

Waves in the Ocean Card 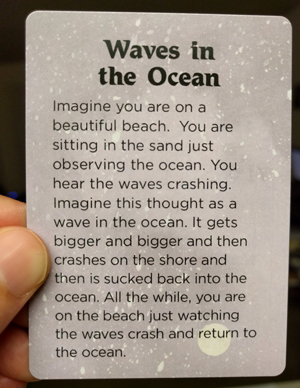 We like that one. The metaphor illustrates that thoughts are just the waves coming back over and over, and are ultimately inconsequential. Sometimes they’re big, but they always recycle themselves back into this huge vast ocean of thoughts. But I don’t have to sit there and watch them and experience them—or even be in them if I don’t want to. I can be back here, on the beach, just noticing them happening.

Ellis has collected his favorite metaphors and exercises in ACT over time to create this game.

At what point in therapy might you use this game with your clients? Would you use it early on, or later in your practice with a client?

EE: It depends on the client. I bring it up at various stages in my practice with any given client if it seems appropriate. More frequently, I use the game in the mindfulness group that I run. The participants really enjoy playing the game and helping each other along their journeys. I’ve had other therapists who bought the game tell me they have used it in individual therapy and group therapy to great success.

Do you find that it starts to click with people?

EE: Yes—the game is very experiential. Clients seem to remember the metaphors or meditations offered on the cards and the visuals of the game, and so they remember them throughout their week.

There’s something about writing your values down on paper that makes you remember—but since it’s in the context of the game, writing this doesn’t feel like a heavy, scary commitment.

Would you play this game with a client multiple times?

And when you’re done with the game you can take your player profile card home and use it as homework.

Ellis Edmunds, PsyD, is a psychotherapist practicing in Oakland, CA. To learn more about him and find out how to get your copy of The Mindful Bus, check out his website.