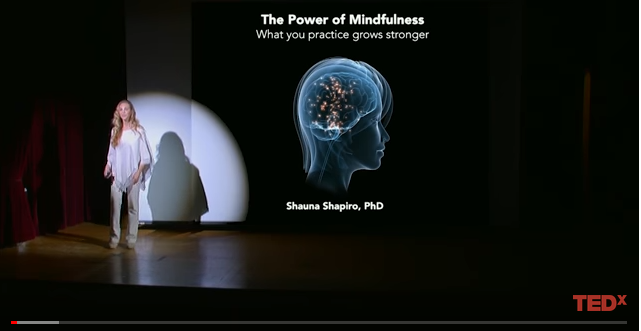 On a good day, I have only failed a few times at the world’s most important job before I even head out the door to the job that pays my bills. As a full-time-working mother of three boys and lifelong overachiever, I have developed an intimate relationship with the voice that says: “It’s never enough, you are never enough.”

Harsh as it sounds, I owed my success to that voice. Anxiety was not merely a byproduct of success, but a necessary ingredient—or so I thought. How else does one manage a full-time job, a two-hour commute, graduate school, a family, and a budding career as a writer without a constant supply of adrenaline, cortisol and caffeine coursing through one’s veins at all hours of the day and night?

Five years ago, I was incredibly fortunate to land in a class taught by Dr. Shauna Shapiro, while pursuing an MA in counseling psychology. Through her teaching, I was introduced to the power of mindfulness. But what set Dr. Shapiro’s teaching apart from any other teaching on meditation I had encountered was her emphasis on not just paying attention, but on how we pay attention.  “Otherwise,” as Dr. Shapiro would say, “a sniper is mindful.”

This distinction between the what and the how of mindfulness transformed my life.

I haven’t quit my job. I still have a two-hour commute. I still fail spectacularly at being everything to everyone all the time: the perfect mother, wife, employee, artist. And there is still a voice that says, “You are never enough.” But now there’s a new voice that says, “And that’s okay.” It’s the same voice that shows up when the people I love fail to meet my expectations, as they inevitably do on occasion.

Our oldest child, a sophomore in high school, struggles in school. He even dared to admit to me recently that he may not want to attend college. I was a straight-A student. I attended an elite university. The job that pays my bills: college admissions consulting. This is a recipe for a major family showdown. But it wasn’t a showdown. I listened, really listened, with love. I showed up for him the way I wish I had shown up for myself when I was his age and for many years after that. It’s never too late. The transformation from mindless to mindful is catalyzed by the lovelight we shine on the dark corners of our inner world. Mindfulness is nourishing the seeds of who we will become with a light that does not judge the seed for beginning its journey in the dark.

Sarah de Sousa holds a B.A. in modern thought and literature from Stanford University and an M.A. in counseling psychology from Santa Clara University. Sarah is an author and published poet who has contributed to numerous publications on the subject of mindfulness and clinical psychology, including contributions to the Oxford Handbook of Positive Psychology and the Handbook of Mindfulness in Education.

Shauna Shapiro, PhD, is a professor at Santa Clara University, a clinical psychologist, an internationally recognized expert in mindfulness, and a mother. With twenty years of meditation experience studying in Thailand and Nepal, as well as in the West, Shapiro brings an embodied sense of mindfulness to her scientific work. She is the author of Mindful Discipline.