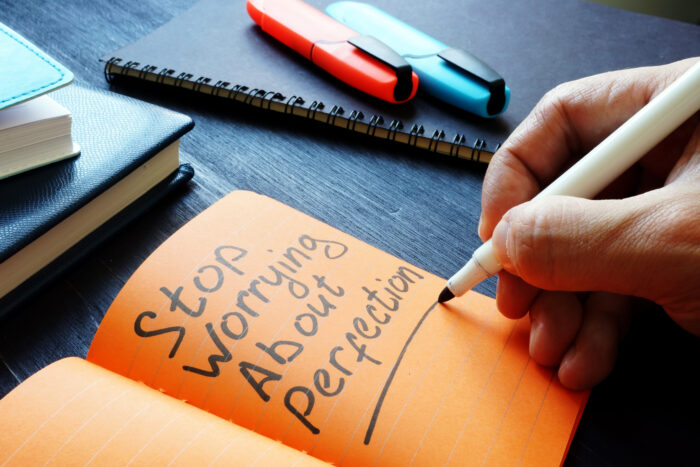 By Jennifer Shannon, LMFT, author of The Monkey Mind Workout for Perfectionism

“I’m a procrastinator,” Andi said. “I put off exercise, house cleaning, paying bills, everything! I don’t know what’s wrong with me. I’m just lazy, I guess.”

I’d seen a lot of procrastinators in my practice, and I’d yet to see one who was genuinely lazy. I had a different guess about Andi.

I began our session by asking Andi to imagine opening her mailbox and seeing a credit card bill. What feeling came up for her? She said it made her feel anxious. I then asked her what thoughts went with this anxiety. She identified thoughts like, I’ve been spending way too much money, and This bill’s probably overdue and I’ll have late charges.

Thoughts like these would seem to act as motivation for Andi to pay the bill before things got worse. But she wasn’t doing that. There had to be some deeper cognition that was stopping her from paying her bills, which were piling up. I asked her, “If it’s true that you’ve accrued late charges and you’ve been spending too much, what would that mean about you?”

She didn’t hesitate to answer. “It would mean I’m STUPID!”

Feeling stupid, less than others, or not up to a task is painfully crippling. If every time Andi sat down to pay bills, she ran the risk of feeling that way, it’s no wonder she put it off.

Andi looked at me like I was crazy. “No way,” she said, “Perfect people get things done!”

Andi’s misconception about perfectionism is a common one. As I’ve learned from my practice and my professional life, the central tenet of perfectionism is to stick with what you’re great at and avoid altogether the tasks that make you anxious. It’s a great short-term strategy. So long as Andi was distracted by social media, cooking, or doing anything that was fun or easy for her, she was not worrying about her bills. But in the long run, Andi’s procrastination was making her feel worse about herself and interfering with solving her budgeting problem. It was clearly a failed strategy.

As a cognitive behavioral therapist, I approach problems like procrastination as more than a behavior problem; it’s a thoughts and feelings problem too. Once my clients connect the dots, they are ready to imagine a new picture for themselves.

The first strategic change I asked Andi to make was in her thinking. Her present perfectionistic assumption—that overspending and paying bills late meant she was stupid—needed an upgrade to something more realistic. After all, lots of people have difficulty in this area. A non-perfectionistic mindset—or what I call an expansive mindset—is, If I spend too much and have late charges, it means I am human. When we view or shortcomings as part of our fallible human nature, we decrease our sense of shame and are better able to take effective action to address a problem.

The second change of strategy was regarding Andi’s behavior. Every time she tried to sit down to pay her bills, she felt overwhelmed. Rather than expecting herself to settle all her overdue bills in one big session, I suggested she break them down into manageable pieces. When we limit ourselves to a short time frame, after which we will stop even if we haven’t finished, we are way more likely to begin the task. To practice, I had Andi set the timer for ten minutes and start to pay her bills, right in session.

Thinking and behaving in any new way is bound to cause feelings of discomfort, and facing up to her unpaid bills, without getting rid of them was painful for Andi; she felt ashamed. In response, I asked Andi to employ a third strategic change: to pat herself on her back and repeat her expansive mindset out loud. She felt silly, but I reminded her that what is really silly is berating ourselves. When we do something that is hard, we need to be encouraged. With self-compassion, we can get so much more done!

Andi wasn’t a lazy person, and she wasn’t stupid either. But like so many other perfectionists, she had fallen into the trap of seeing herself that way. These harsh self-judgments won’t die easily, but with practice, anyone, including you, can beat procrastination with these three strategic steps:

Jennifer Shannon, LMFT, is author of Don’t Feed the Monkey Mind, The Shyness and Social Anxiety Workbook for Teens, The Anxiety Survival Guide for Teens, and A Teen’s Guide to Getting Stuff Done. She cofounded the Santa Rosa Center for Cognitive-Behavioral Therapy in Santa Rosa, CA. She is a diplomate of the Academy of Cognitive Therapy.